Of doomed trips to Burger King & more middle of the night goings on... 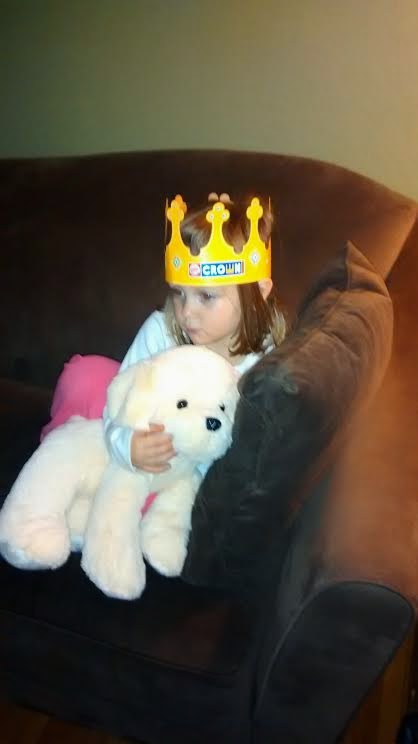 Let's start with a quick public service announcement: if you're praying the 54 day rosary novena, today is the day that we switch from prayers of petition to prayers of thanksgiving. You're welcome. ;-)

I've really been enjoying that novena, and also (totally unrelated, but you're used to that by now :)) my evening time with my fabulous husband as we lead up to Halloween and revel in both classic and cheesey horror movies. I wouldn't say that I'm a huge horror movie fan, but this time of year it just feels right. :) We've been having a good time with that. We pair drinks with the films, I mean, you can't go wrong.

And thank goodness, given what we've been dealing with overnight these days. :0

At left, you see our daughter, post-Burger King playground hangover. Mike teaches Monday nights, and so the kids and I often make plans to have dinner with my mom on those evenings to give us something fun to do. There is a Burger King halfway between my parents' house and ours, and although I don't make it a habit to eat fast food, the playground is a big draw for the kids. And Burger King actually has a really good apple, cranberry and chicken salad, fyi. :)

So we get there, eat, and let the kids play. Henry was good about taking Anne around the play area, since it's one of those tunnel systems that kinds of freaks me out.

They did well, but I knew it would be tough getting Anne to sleep after coming down from the playground high. She was removed with the most sour expression on her face that you can imagine. :0 We got home and I made Henry get going on his shower and then his homework. I let Anne veg a bit and watch a cartoon on Nick Jr. so that she would settle down. Sweaty from the playground, she proceeded to drink a LOT of water.

I'm sure you can see where this is going. :0 The cartoon ends. I tell Anne that it's time to get ready for bed. She refuses, to the surprise of absolutely no one. I carry her upstairs, amid protests. I stuff her into a footed sleeper. I ask her to use the bathroom. Once again, she refuses. A power struggle ensues, in which I'm successful at getting her physically onto the toilet, but NOT to produce any actual pee.

I know that this is going to end badly, but it's not like I can force the child to go. She isn't dry through the night yet, and so she wears a diaper to bed at night anyway. However, given the sheer volume of water that has been consumed, I have a very bad sense of foreboding. Indeed...

Mike bravely goes in. I hear a tearful conversation, followed by the sounds of sheets being changed. Ugh.

I go in, and sure enough, poor Anne is soaked as is every piece of her bedding. Her diaper had been completely overwhelmed. We had to do a full scale sheet, blanket and clothing change. No fun for anybody.

So, we're all exhausted again this morning. I feel bad, like I should have done more to have prevented the wetting, but sometimes it's the just way of things with obstinate children at this age. :) We'll get there.

How is your Tuesday going so far, everyone?
Posted by Tiffany at 11:13 AM