The Lord Rising in Our Lives: Feast of the Ascension 2014 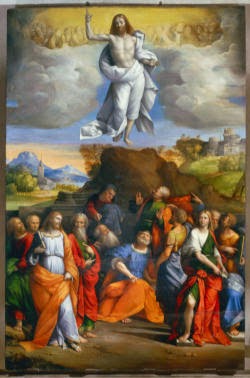 Good morning all! Happy feast of the Ascension to you. I live in a province in which this holy day of obligation is *not* transferred to the following Sunday, and I didn't realize that this was somewhat of a controversial issue. :0 Via the wonders of social media ;) I am now informed. There are only a handful of provinces (New York, Boston, Hartford, Newark, Philadelphia, and Nebraska) that retain this holy day of obligation on its Thursday placement, 40 days after Easter. I know many Catholics who feel slighted because they would like to attend Mass for the holy day on its traditional date. If you live outside of one of the aforementioned provinces, the readings at Mass today would be for Thursday in the Sixth Week of Easter.

At any rate, it was in fact an obligation for me to attend Mass today in my diocese, but I see holy days of obligation in such a positive light. I love the opportunity to prioritize morning Mass during the week, I miss attending daily Mass so much. When I was younger, I often attended Mass at noon during the week. I rarely do this anymore, and its because I'm just at a different state in life now. Previously, I was a student in school, or was single and working, and it was easy to carve out time to walk to lunchtime Mass, and there were churches very close to me. Now, to attend Mass at lunch, I have to walk out to my car, which is parked about a 5 minute walk away from the library, that's just the way the parking situation is here on this campus, and then drive to Mass, and the entire shebang is just highly time consuming and inconvenient. Instead, I LOVE morning Mass now, it's such a wonderful way to start the day. That isn't always easy, given that my parish's Mass is at 8 am and if I have something going on at work right at 9 am, I won't make it. But I do what I can.

This morning, I was scheduled to lead a meeting at 9 am, so I was in a bit of a bind. However, I scouted out churches (I take this task very seriously, and am proud of my abilities in this regard :0) and found a parish on my drive into work that had an 8 am Mass. It's close enough to campus that I thought I could make it to the library in time for my meeting if I didn't stop at my office beforehand. I had to leave home about 15 minutes earlier than usual, but obviously, very worth it.

And so it was. Mass was absolutely lovely. During the homily, the priest described the feast of the Ascension as being a time of Christ rising in each of our lives in small ways. We all woke up earlier and carved out time to attend Mass, an evidence of Christ working in our life this very morning. We can do small things like add in even a few additional minutes of prayer to allow the Lord to rise in our life on other days as well. I just loved how he framed this.

But anyway, it was a lovely start to the morning. I was thinking as I was sitting in my pew how I felt connected to other Catholics around the world attending Mass for this feast day. And isn't that a beautiful thing?

Ok, so let's chat: is the Ascension a holy day of obligation in your diocese? If it isn't, would you rather it be so? Leave me a comment!
Posted by Tiffany at 10:49 AM

Email ThisBlogThis!Share to TwitterShare to FacebookShare to Pinterest
Labels: Catholic, Feast of the Ascension, holy days of obligation