The Catholic Nook: May Crowning 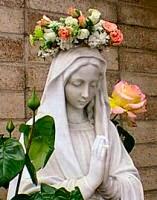 Afternoon all! And a lovely day it is. I attended the May Crowning ceremony at Henry's school parish yesterday morning, and a few of my non-Catholic friends have asked me what this is. May is a time of rich sacramental and other liturgical celebrations in the Church, and so I thought the crowning was a lovely addition to our Catholic Nook.

May is traditionally (at least in modern times) a month in honor of Mary for Catholics. We celebrate her role as the mother of Jesus and as our spiritual mother. What Catholic parishes will do as a demonstration of that place of honor is a May Crowning. A statue of Mary is set up in front of the church, or outside. Usually children who recently received their First Holy Communion will process in and present flowers to Mary. One of the children will place a wreath of roses atop her head, and the statue will remain with the flowers for the duration of the month as a reminder of what we are remembering. We consider Mary Queen of Heaven and Earth.

Yesterday, as I mentioned, I attended the May Crowning at the parish affiliated with Henry's school. This was the first May Crowning that I have seen as an adult. I seem to remember my sister Shauna'h participating in a May Crowning as a child, and having the coveted role of placing the flowers atop Mary's head (cute!), but I don't recall whether my class ever did this as part of religious education. At any rate, this is how it went down:

The First Communicants (third graders, in our diocese) processed into the church wearing their First Communion finery. One little girl in Henry's class isn't Catholic and thus did not receive the sacrament, but she had a role in this ceremony just like her classmates, which I thought was wonderful. She led the line of little girls down the aisle bearing small bouquets of flowers, looking very pretty in a cream colored dress that coordinated well with the First Communion dresses. As each twosome got up to the altar, one boy and one girl, they bowed to the Tabernacle and placed their bouquet of flowers near the statue. At the end of the line came a little boy carrying the wreath of roses on a pillow and a little girl who would crown Mary with them. When they reached the altar, the final little girl crowned Mary, and everyone had a seat.

The children from the third grade class each had a role to play aside from the initial procession. Three girls read a poem to Mary, and a handful of children (including Henry! #precious) read the Litany of the Blessed Virgin Mary. There was a Gospel reading and a short homily. Then some of the children read prayers asking for Mary's intercession, and the entire class sang "Lady of the Roses." Henry does not enjoy singing, and usually complains at home when the class is tasked with a song for some sort of event. But this time we hadn't heard a peep of protest out of him, and I asked him about it later.

"Oh yeah Mommy, I love 'Lady of the Roses.' Did you like the poem too?"

So.Precious. He *liked* the Mary song, and hence sang it with gusto. I was so, so pleased.

I absolutely loved the ceremony, and I love that Henry is participating in these types of rituals as part of his religious education. Has anyone else attended a May Crowning this year? Leave me a comment!

*Image from www.catholicculture.org
Posted by Tiffany at 2:32 PM