An epic day - of kidney stones & dancing in awkward spaces...

This was one for the record books, folks. Thank GOD we hadn't scheduled Henry's First Communion for this past Saturday (we had a choice of 2 dates, and we chose May 3rd instead) although that day was also crazy in it's own way. At any rate, this is what happened Saturday, a day on which we also had planned Mike's final play performance, a dance troupe performance for me at a charity event, and later, the cast party for Mike's theater group, which I was planning to attend with him:

Around 5:45 am, Mike gets out of bed to use the bathroom. He comes back and tells me he's not feeling well. There was lots of tossing and turning involved and eventually he got out of bed to go downstairs so that he wouldn't disturb me. I have to be honest and admit I was a little relieved about this. :0

Pretty soon I can hear a lot of commotion going on downstairs. There was moaning and groaning and all sorts of other unpleasant stuff. Just as I was getting over the fact that I wasn't going to be going back to sleep, I hear Mike call for me pitifully up the stairs:

"Hon, there's something really wrong. I think I have to go to the hospital."

He wanted to try Urgent Care, but they weren't open yet. I called my mother-in-law to come stay with the still sleeping kids (thankfully, they live only a few blocks away) and threw some clothes on. By this point, I nearly had to scrape Mike up off the floor. He was in a LOT of pain. It was in his right side/abdomen, and I was concerned that it was his appendix.

The instant my mother-in-law arrived, we set off for the Emergency Room. He started to feel better on the ride over, but I convinced him to still go in and get checked. This definitely didn't seem like simply some bad indigestion.

Two hours in the Emergency Room later, we had the diagnosis: a kidney stone. Poor Mike.

I was relieved that he didn't need surgery and that it wasn't something more serious. I'm also glad we wound up at the ER rather than Urgent Care (despite the hefty co-pay) because they can do everything right there. Blood work and urinalysis in 45 minutes, CT scan in the next room, results within 30 minutes. Very convenient, and puts your mind at ease quickly. The *registration* process actually took longer than the medical care did.

But we had a dilemma: Based on the stone's current location, the doctor thought it would pass within 24 hours. Mike was scheduled to play a fairly large role in the play in less than 10 hours. I don't even know what the the theater group would do should an emergency arise and one of the actors can't perform. It's not like they have understudies for community theater. So we had to just hope for the best.

Mike guzzled water, hoping to move the stone quickly and/or help it to disintegrate. He seemed fine for the rest of the day, and in fact has had no further sharp pain like he had originally experienced. We think the stone has passed.

So, that was good, an answer to many prayers. He went to the performance, and I just prayed that he wouldn't start feeling poorly during the play itself. Meanwhile, since he was doing ok, I went off to the scheduled troupe performance at the Lebanese charitable dinner.

Oy. :) The troupe performed beautifully, I could see Claire beaming at us. But there weren't really that many people there, which always makes for a more awkward situation. There was plenty of room for our Wings of Isis, which was a plus. 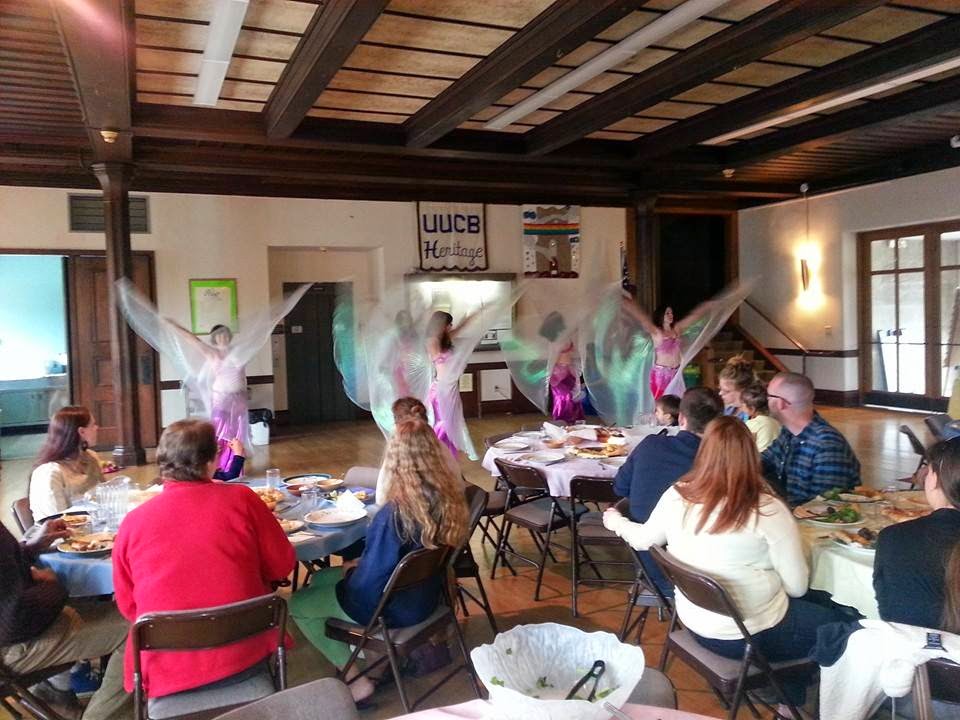 The woman who organized the event was just SO enthusiastic and excited that we were there to dance. But the rest of the crowd?

They were just ok. :) There were a few people there of Middle Eastern descent, as evidenced by a few zaghareets that we heard. But the majority of the crowd wasn't, and they were polite, but you-could-hear-a-pin-drop quiet, as so often American audiences are. So we did our wings number, then Claire danced while we changed costumes. Then the troupe came back out to perform two more numbers, a pop song plus a drum. Then came the "getting the audience up to dance!" part.

Claire had a plan. As soon as our drum music faded, "El Enab" would come on, one of the perkiest Arab language songs you can possibly imagine. We were to improvise and dance out amongst the people, trying to get some faithful souls up to dance with us. If the crowd seemed like a dud, after El Enab finished, Claire would dance over to the sound system and fade out the music. But if things were going well, we had a few other songs that we could continue improvising to.

So. We strike our final pose. El Enab starts up, and I gamely dance out amongst the tables. To dance over by an individual or a small group, we never single out men. That's a no-no in Middle Eastern dance etiquette, although to me, that's common sense anyway. Women and children only, please! Polite passing smiles, fine, but anything else sends the wrong message. I made a beeline for a 3 year old little girl, but generally wound my way around the tables. For most American audiences, this is something they're not sure what to make of. Most, if not all, dance performances they've ever seen have been up on a stage. Middle Eastern dance is inherently improvisational and in the round, with the dancer interacting with the crowd.

Well, many audiences find this somewhat uncomfortable. :) And that was definitely the case Saturday night. You get polite smiles, but people have a definite "deer in the headlights" look about them the whole time. There was no way any of these people were getting up to dance with me. Not that I wanted them to anyway. :0 Aside from the 3 year old. Her, I would have danced with.

Eventually, Claire got the organizer woman to get up and dance, but the other butts stayed firmly in their seats. I was dying for the song to end, and improvising definitely makes music seem like it may never end. When El Enab finished, I was relieved to see Claire dancing over to the sound system to fade us out. I thought we danced awesome, everything went smashingly, but the audience just wasn't right for it to become more interactive.

As we were changing back into our street clothes, there was a knock on our dressing room door. It was the organizer lady.

After that, I went out to eat with my belly girls, and then waited at home for Mike to call me to attend the cast party. I was a zombie by that time, but it was so, so enjoyable. The director told me that if the actor hadn't come along who was ultimately case in the lead role (who had a lot of theater experience) Mike would have gotten the lead. :0 And that he couldn't believe at the audition that that was Mike's first acting experience ever. He was blown away by his performance, and hopes that he auditions for future plays. I am SO, so proud of my Sweetheart, and can't wait to see him in future productions!

We crawled into bed around 1 am, having been up for nearly 24 hours. It was epic, but we survived. :)

How was everyone else's Mother's Day weekend?
Posted by Tiffany at 1:36 PM