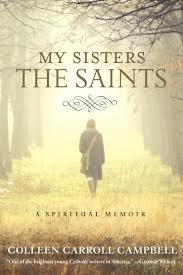 ...and we're off to a quick start on the Catholic Book Club. :) I actually read My Sisters the Saints: A Spiritual Memoir, by Colleen Carroll Campbell over the course of only 2 days, which certainly speaks well of its ability to engage.

I love spiritual memoirs, always have. But my favorites are the ones that really delve into the person's *story*. We all have one, and gosh darn it, they're all interesting! I honestly think anybody could have themselves featured on one of those 60 minute Biography channel specials and it would be fascinating. You just have to be willing to share personal details about your life, things that others can relate to. I don't enjoy memoirs that spend a lot of time theorizing on theological matters (a little is ok, but a lot? you should just write a theology book :)).

This book did a beautiful job of combining both things. The author sets the scene by describing herself one Sunday morning in her college apartment complex, feeling sick from drinking too much the night before, and observing the signs all around her of drunken debauchery. It's the beginning of a reigniting in her childhood Catholic faith that she never left behind but that had fallen to the back burner. Throughout her journey through life from that point forward she discusses a saint who came to mean a lot to her via whatever issue she was struggling with at that time. She begins with St. Teresa of Avila, whose writings stirred her soul and made her realize that although she still went to Mass, she had no prayer life to speak of.

Ultimately, she moves on to relationship woes (lots of apathetic Catholic men out there), major career decisions (she was a speechwriter for a time for former president George W. Bush), her decision to marry her husband, her cherished father's agonizing descent into Alzheimer's Disease, her and her husband's painful struggle with infertility. All the while, a saint makes herself known to the author and she realizes that this particular saint's story is a balm to her soul that she had not previously realized. St. Therese of Lisieux, St. Faustina Kowalska, St. Teresa Benedicta of the Cross (Edith Stein), St. Mother Teresa of Calcutta (lots of Teresas going on here :)), and Mary, our Blessed Mother.

The author weaves the saint's story into her own, and it makes for compelling reading. I've always wanted to write a spiritual memoir, and this book was so good my first thought was what a great idea she had on a unique spin for a memoir, why didn't I think of it first?! lol.

This is a great book, I couldn't put it down. It's a more accessible spiritual read rather than the actual saint's writings (where available), and it's very thought-provoking. I highly recommend it. I borrowed a copy from my public library, but it's also available at Amazon in hardcover, and for Kindle for $11.99.
Posted by Tiffany at 11:51 AM