Our view from locked behind the baby gate 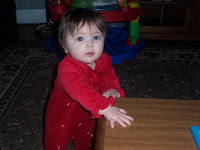 So we're officially at THAT PLACE in parenting again. Traversing from one of the upstairs bedrooms downstairs goes as follows:

Down the stairs. Into the living room, wait. Baby gate there, to prevent Anne from getting into (a) the stairs, (b) the radiator, (c) the bathroom where she particularly enjoys the trash can, and (d) the guest room/office where Hank often spreads itty bitty Legos out everywhere as he builds and rebuilds various emergency vehicles and an alien spacecraft with a human holding bin.

We move into the kitchen, to access the other doorway into the dining room/living room space. That's unblocked, and for whatever reason, Anne is far less interested in getting into the kitchen, although she occasionally tries to venture in there on her own to grab at the empty beer bottles and other recyclables. The dining room is an Anne-safe zone, with all electrical outlets covered and no small pieces lying to and fro. She likes to crawl around under the table and generally do victory laps around the room since there's a lot of space in there.

Moving into the living room proper, you're likely to step on a squeaky infant toy or twenty, and accessing the front door is a bit of a chore. The neighboring fireplace and a DVD case holder are blocked off with a strategically placed dining room chair, and new keep out devices are in the works for a nearby bookcase. Her exersaucer (Godsend that it is) blocks another DVD case holder, plus some electrical wires.

Such is our state of baby wrangling these days. Not only is she standing AND cruising, she's now babbling, and I have to say it's totally adorable.

It's like having a little Smurf in residence at all times. And it's wonderful, but also exhausting. So Mike and I were thrilled to go out to dinner by ourselves Saturday night to celebrate our 7th wedding anniversary. He even volunteered to go to Mass with me beforehand at a parish down the road from our chosen restaurant, which pleased me greatly. He loves vigils for some reason, while I prefer Sunday mornings. But hey, whatever. If he wants to go to Mass, I'll go when he wants to go. :) The only time I *have* to go Sunday mornings is when I'm the catechist for Children's Liturgy of the Word, which is only once per month.

Anyway, it was a much more modern church than either of us usually prefers, but I have to say, for a modern design it was quite pretty. Which I hope doesn't sound disparaging, I just prefer a more traditional look. But this church used natural light very beautifully, and still had a high ceiling, with wood beams, and although it mostly lacked traditional stained glass, it looked lovely. The Christmas decorations were still up and were gorgeous, and it was one of my very favorite feasts, the Epiphany.

It was a good, good weekend.

Unfortunately, I just discovered that I forgot my breast pump ice pack AGAIN and have to put my milk into the common work refrigerator. WHAT IS WRONG WITH ME?!
Posted by Tiffany at 9:45 AM