The levels of ranking baby sleep 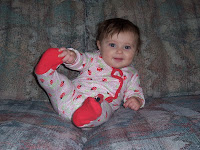 Now that I'm onto kid #2, I like to think that I've learned something about infant sleep. And that would be that they don't sleep well for about a year. I don't care how many people tell me that their babies "slept through the night" at 8 weeks old. Their baby may sleep from midnight until 5 am without waking. Good for them. Mine does too, sometimes. But I'm talking, you go to bed at a normal hour and wake up sometime after 6 am, and the kid sleeps all that time without waking. That takes about a year.

Right now, we're in the real badlands of infant sleep. Anne goes down nice and early, and can sometimes soothe herself back to sleep if she wakes for an abbreviated period. She *usually* gets up twice between 7 pm and 6 am. But she's starting to teethe, and this my friends, commences many months of misery, I'm here to tell you. Sigh.

And this is the other thing I've learned: just when you think you've got the sleep thing down, Whamo! The baby changes their habits. It'll happen every time.

So, last night as I lay awake at 2:30 am, I contemplated the many levels of rating infant sleep.

(1) This is the cream of the crop. Your baby is a miracle sleeper!
(2) Baby gets up once per night. This is awesome!
(3) Baby gets up a few times a night and this is very age appropriate. You feel lucky that it's not worse.
(4) There seem to be 1-2 too many wakings and you're a bit cranky about it, but not suicidal.
(5) Your baby refuses to sleep and you're wondering how anybody has more than one child.
(6) WHAT ON EARTH IS GOING ON?! DO YOU THINK IF WE PUT ON SOME MUSIC SHE'D SLEEP?! DO YOU THINK IF I LET HER LAY ON MY CHEST SHE'D SLEEP?! DO YOU THINK IF WE TOOK TURNS BOUNCING HER UP AND DOWN WHILE HUMMING SHE'D SLEEP?!

Last night was one of those #6's. That's just the way it goes sometimes. But at 2 am last night, Mike and I were both downstairs catatonically watching an infomercial about new stoneware pots and pans while Anne sucked voraciously on a cold teething toy and drooled all over my lap. And the thing was, those pots and pans seemed like a really good deal at that time of the night. If we call now, we'll also get a free sauce pan with a $90 value!

Oh well. Some nights are just bad nights. But tonight is a new night.
Posted by Tiffany at 1:02 PM