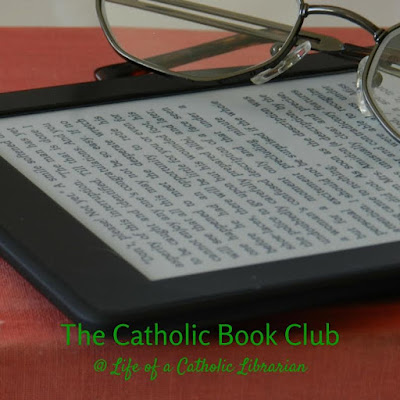 Hello to you out there, fellow book club aficionados! I'm super excited to finally be in the first book club post of our new format. I know that  number of you have been reading along with me, which is SO INCREDIBLY EXCITING!

This spring/early summer we are reading Church of Spies: The Pope's Secret War Against Hitler, by Mark Riebling. For anybody who has not yet embarked on this book, here is the back cover summary:


The Vatican’s silence in the face of Nazi atrocities remains one of the great controversies of our time. History has accused wartime pontiff Pius the Twelfth of complicity in the Holocaust and dubbed him “Hitler’s Pope.” But a key part of the story has remained untold.

Pius ran the world’s largest church, smallest state, and oldest spy service. Saintly but secretive, he skimmed from church charities to pay covert couriers, and surreptitiously tape-recorded his meetings with top Nazis. When he learned of the Holocaust, Pius played his cards close to his chest. He sent birthday cards to Hitler—while secretly plotting to kill him.

Church of Spies documents this cloak and dagger intrigue in shocking detail. Gun-toting Jesuits stole blueprints to Hitler’s homes. A Catholic book publisher flew a sports plane over the Alps with secrets filched from the head of Hitler’s bodyguard. The keeper of the Vatican crypt ran a spy ring that betrayed German war plans and wounded Hitler in a briefcase bombing.

The plotters made history in ways they hardly expected. They inspired European unification, forged a U.S.-Vatican alliance that spanned the Cold War, and challenged Church teachings on Jews. Yet Pius’ secret war muted his public response to Nazi crimes. Fearing that overt protest would impede his covert actions, he never spoke the “fiery words” he wanted.

Told with heart-pounding suspense, based on secret transcripts and unsealed files, Church of Spies throws open the Vatican’s doors to reveal some of the most astonishing events in the history of the papacy. The result is an unprecedented book that will change perceptions of how the world’s greatest moral institution met the greatest moral crisis in history. 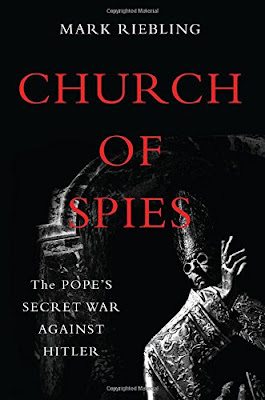 Intriguing premise, to be sure. I haven't read this sort of historical non-fiction in quite some time, so I was glad to have something different from my norm to read. Let's get into the nitty gritty!

The Prologue grabbed my attention from the outset. I'm always taken with books that start out with a tantalizing glimpse into something very dramatic, and we're not quite sure at that time how that scene fits into the larger story. Loved.

Chapter 1 felt like it took me quite some time to get through, though all of the background information on Pius XII, and the state of the world at the beginning of his papacy, was quite interesting. After chapter 1, it felt like the narrative moved more quickly.

Just as quickly, I got mired in names. ;-) I have a difficult time keeping track of what name belongs to what character in any book or film that I am consuming. I am easily confused, I suppose. I had to keep flipping back in my Kindle to earlier chapters to see if my hunches about who was who were correct so that I could keep tabs on everyone.

My initial impression is that it is hard to believe that this is non-fiction! Some of the events are quite unbelievable. I keep thinking to myself: "Really? This really happened?" It's all very dark and dramatic! The book is quite well footnoted, so I have no doubt as to its veracity. But the tone that the author creates does read in a way that is more common in fiction. To me, this is a very good quality for a substantive work on non-fiction! It certainly makes it more attention-grabbing for the reader.

I'm really enjoying feeling like a fly on the wall in the Vatican for this specific period of time. A difficult period of history, to be sure, but obviously very moving. I also have a papacy fascination. I love reading about daily goings-on in the lives of the pope and others in Vatican City. It makes me feel more a part of my very global faith.

Now I am ready for your thoughts. What did YOU think of chapters 1-5 dear reader?!

A few of you have mentioned that it was difficult to stop just at 5 chapters, so what would you like to do for June? Would you like to just read the rest of the book, which would be 20ish more chapters? Or would you like to cut it in half, and read chapters 6-16 for June, and then finish 17-26 plus the Epilogue for July? We likely won't start another book until September, just FYI. I'll likely put up a poll in August to vote for what we'll read over here on this humble blog for the fall. Once again, I'll include both fiction and non-fiction choices. So if that impacts your decision about how fast to read this book, you now have all of the information at your disposal. :)
Posted by Tiffany at 9:18 AM