Get your tissues ready...

This seems like the biggest milestone birthday we've had with her since she turned 1. I'm not entirely certain why, but it does feel more significant in some way.

It's a Wednesday, just like May 18th was back in 2011. Do you know who else has a birthday on May 18th? St. John Paul II, baby!!!! I was pleased with my body for giving me that small victory.

All you women out there who have been, or are, pregnant, let us rally together, yes? Saying the above to a pregnant woman is akin to an obscene gesture. Do you think she WANTS to be there? I assure you, SHE DOES NOT. By the ninth month of pregnancy, everything hurts, your belly feels like it is the size of Madagascar, you haven't slept well in nearly a year, and you would sacrifice an appendage just to have the baby OUT NOW.

"You mean you haven't had the baby yet?!"

It took every ounce of willpower not to reply: "Does it LOOK LIKE I've had the baby?!"

All of this is to say that I was just a HAIR cranky on the evening of Tuesday, May 17th. I was uncomfortable, I was irritable, and I really wanted a drink. Mike gently suggested that maybe I should call in sick to work the next morning, and I porkily contemplated that possibility as I tossed and turned for the entire night, unable to sleep well. At one point, I went downstairs to read for a bit and try to doze off, but that went over about as well as you would expect.

About 5 am I went back up to bed with Mike, to at least be more comfortable even if I wasn't able to sleep. If you can believe it (snort, I'm certain that you can, given what you know about me) I had decided to go into work, given that I was scheduled for the 9 am reference shift, when suddenly at 6:15...

My water broke. Much rejoicing was heard across the land.

Mike made arrangements for Henry while I paced around the house like a caged animal. I called the doctor, who told me to go to the hospital right away given that my water had broken. I made general noises, concluded the call, and stayed home for another two hours. :0 I wasn't in active labor yet, and the last place I wanted to be was the hospital. I had done this before, and thus I knew that some of the things they do in the hospital have the effect of actually slowing your labor DOWN, and that's the last thing I wanted.

Mike took Henry to his grandparents, and then we ate breakfast. Mike showered while I paced up and down the stairs. I waited until I had regular, uncomfortable contractions before we finally headed to the hospital around 10 am.

Once there, they did the hospital thing, which I hate, but I was prepared for this time. I was much more proactive in my labor with Anne than I was with Henry, standing and moving around as much as possible to keep the contractions going. I kept visualizing the contractions bringing the baby into my arms, and using my belly dancing breathing, and it worked like a charm.

By shortly after 1 pm, I was in transitional labor, and I knew I was close. I delivered her about 1:45.

I remember the moment she was born very clearly. I thought to myself:

That's really what I thought. :0

In contrast to Henry, who was silent at birth, and had to be coaxed to cry, Anne was *screaming* before she was even fully out of the womb. Harbinger of things to be come, to be certain. She was also extremely goopy with vernix when she was born, and the doctor hadn't announced her sex right away. We didn't find out at our ultrasound, just to wait for this moment. Mike made a query to the doctor, who responded:

That's really what she said. :0

Anne was squalling so much, and being hosed down to get the goop off, that it was hard to see anything. Then the doctor flopped her over, and announced that she was a girl. 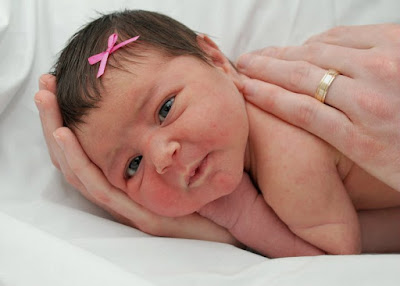 Last night, Anne came up and hugged me. I told her that I loved her, and that when she came into our family, she really brightened our lives. And I mean it. She really, truly did. And she replied:

I'm feeling a little emotional today, but in an incredibly good way. Life is good, it is really, really good, and I can never thank God enough for it.
Posted by Tiffany at 11:24 AM