Hi all *beams* and hope that you are surviving this fall Monday along with me. Today is the craziest day of the week for me, so I'm doing what I can to perk things up. For instance, da da DA! 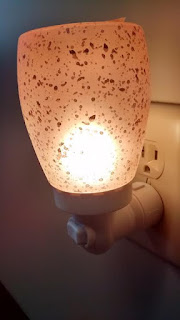 Isn't it adorable? It's my new Scentsy fragrance warmer for my office. I have a cube of Coconut Pumpkin Pie wax melting in there and my office smells like a bakery. HOW did I not know about such possibilities before?! I love it. In terms of fragrances, my favorites are "foody" smells. It if smells good enough to tempt one to actually consume wax or soap, then that's the one I want. I noted with amusement that Scentsy advertises their wax as "food grade, and thus safe for pets and children." Something tells me these little cubes get nibbled on from time to time.

So, I'm happily sniffing the air in my office and preparing for class right now. Monday is my teaching day. So far so good, but I'm always relieved when that's past for another week. When I teach, I have to be "ON!" kwim? Just like when I perform dance. Or hang out with people that I genuinely like at conferences. ;-) Social interaction can be taxing for introverts. I absolutely love it when in a fun situation, but it uses up my power supply faster, that's for sure.

OK, so the weekend. On Saturday my troupe was scheduled to dance at an outdoor artisan's market. There were projections for rain, but I thought that the timing was going to work out, and that we would dodge it. We had rehearsed the group numbers, and I had a loose plan for my solo music both with or without veil, depending upon wind velocity. Saturday morning found me with makeup on and perky, ready to don my Saidi dress and head out the door, when...

...we received notification that the market had been cancelled due to storm conditions down by the water.

Major bummer. I was really looking forward to it. I love performing with my troupe. I do get very nervous still about dancing solo (working on that, but it's a glacial process :)) but with my troupe? Safety in numbers. And we always have so much fun together. So that was a drag.

When Anne went down for a nap, I put on a new performance playlist I've been working on (and it still needs work, I discovered...) and swirled around the kitchen for a bit, bringing out both Veil and Sword. They were both thrilled to be included. That was a fun workout for the day.

Oh, I should mention that although we put Anne down for a nap, she didn't actually SLEEP. Thus, when we later went to the vigil Mass, she was in such a foul mood that she refused to sit in the pew. Instead, she chose to stand, unmoving, and stare at us menacingly, looking like something out of Village of the Damned.

Mike, in whispered tones: "Is she always like this during Mass?"

Me: "No, it's usually the opposite problem."

On Sunday, we made our annual apple picking pilgrimage. We've found a really cute farm about 30 minutes away that we love. There is a hay maze and animals for the kids to pet:

Anne: "Mommy, look at this little turkey, she is my friend!"

Henry: "Um, I read the sign about Thanksgiving. I think the turkeys..."

Me: "...are very, very hungry, look at how they're going to town on delicious-looking pile of fruit and vegetables! Anne, did you see the goats?!"

Also lots of pumpkins for sale, of course, and tons of apple trees. In season this past weekend were Macintosh, Gala, Macoun and Cortland. We picked quite a lot of them, and have cobbler and pie plans for later in the week.

And so a good time was had by all. Unfortunately, the wine tasting guy wasn't there, which would have enhanced the fun had by Tiffany and Mike ;-) but everything went very well. We got some photos:

...and headed contentedly home with our apples. :)

How was YOUR weekend, dear reader? Don't forget, the St. Therese novena starts tomorrow!
Posted by Tiffany at 3:13 PM