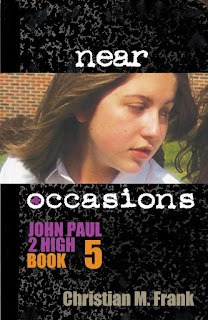 Happy Catholic Book Club Wednesday, everyone! It's been a little while, hasn't it? We skipped July, and then I didn't have the August book finished in August, so it feels like a long time. But I have to say, I'm back to thinking about the book club, and it's all exciting! It's September, fall is in the air, it feels like a good time to settle in with some books, yes? The book I'm about to discuss is a YA title, and later in the month we have a novelized spiritual memoir. I'll talk about my ideas for future titles at the end of the post, OK? And you can chime in too!

So this book is part of a larger series, John Paul 2 High. All of the books are available from Amazon in print and for Kindle. They have been reissued of late by Chesterton Press in a coordinating color and photographic scheme, and are quite lovely to behold. I have the entire print run of books, and I'm looking forward to sharing them with my kids when they get to be high school age.

The book I read this past month is the latest entry in the series, titled Near Occasions. Let me speak first about the series as a whole. I like YA books generally, and I really love this series because of the specific Catholic focus. The books chronicle a group of students at a new (and super small) upstart Catholic high school named in honor of St. John Paul the Great. The characters run the gamut from devout Catholics with possible religious vocations, to a girl from a broken and irreligious home, the class clown, an athletic guy that all the girls want to date, several shy and previously homeschooled students, and the cradle Catholics with a decided lack of enthusiasm for their faith, harboring all sorts of insecurities one would expect at that age. Each book features two of the main characters more prominently, and has new stories and challenges for the characters, as well as a storyline that persists throughout the series about an unknown assailant who is stalking one of the female characters and engineered a school shooting at the nearby public high school. By Book 5, the characters are quite well developed, and they're going into their second year at John Paul 2 High. The scene is as follows:

School's back in session at John Paul 2 High, and for students J.P. and Liz, not much could be worse. The little start-up school where both their moms teach has doubled its number of students, bringing in a gaggle of clueless freshmen, singing charismatics, and annoying personages. For Liz, the major annoyance is Mary Summers, her old rival for Brian's affection. For J.P., it's a Byzantine Catholic named Athanasius Courchraine who somehow manages to be even cooler than J.P.

With Celia pushing the gag-inducing idea of creating a Catholic "community" in the midst of formal education, both kids escape to a place where religion is off the table-- Sparrow Hills High.

Then, as Liz joins the cheer team and J.P. becomes the school mascot, they start hearing rumors about the school shooting that happened at Sparrow Hills last spring. The police say the shooter is dead... but is he?

Unable to resist a challenge, Liz and J.P. get on the case. But the more they investigate the hazier the police evidence seems. And if the Sparrow Hills Shooter is still out there, no one is safe...


It's been well over a year since I read Books 3 and 4 (which came out in close succession), so when I picked up Near Occasions I was having a difficult time remembering some of the events that the characters were talking about. I will say, although it is obviously ideal to read these books chronologically as a series to get the most out of them, it *is* possible to read this as a stand alone book, because it felt like that is what I did given the time lapse. And I was able to follow along just fine.

I really like the characters in this book, they are quite well developed and likable. The female lead, Liz, frustrated me sometimes with her choices, but I know it's because we're remembering our own ill advised 15 year old actions, yes? :) The book started a bit slow, beginning with the start of the school year, and introducing some new characters. That's a good thing, but as I mentioned, I wasn't reading very quickly at the beginning, and it's because the story hadn't quite grabbed me yet. But midway through, that changed. I started picking the book up to read during free moments, which is always the sign that I am truly enjoying the story. The action accelerated, and I was dying to see what happened at the end. And the end was very interesting in and of itself, because my feeling about whether or not the person most of the characters now believe to be the shooter kept changing, literally, from page to page. The ending leaves a nice cliffhanger for the next book, in terms of how things will work out for the accused, and whether John Paul 2 High has a future. I loved it! I already checked the publisher's website about Book 6, but no word on a release date yet. *long suffering sigh*

Have you read any of the John Paul 2 High books? What do you think? Later in September I'll be reviewing Chasing Francis: A Pilgrim's Tale, by Ian Morgan Cron. I started this book last night, and !!! I LOVE it. It reads like a spiritual memoir, but it's a work of fiction about a megachurch pastor having a crisis of faith and turning to Franciscan spirituality. I think I got this during a sale, but it's priced at $10.99 right now for Kindle, similarly for paperback. I'd think the chances of your public library having it are pretty decent, as well. I hope that some of you read this one along with me!

A quick housekeeping item before I sign off: future titles for the book club. For October, I'm thinking of listing a children's book. Unusual, yes, but still worthwhile, in my opinion. This is something I got for Henry, so for middle readers. Thoughts on this idea? Also, do you have titles you'd like to suggest for us to read this winter? Do leave those in the comments!