A weekend of worries, dance workshops, gift knitting & parish planning, settle in with your coffee...

Happy Monday everyone! And yes, we're being generous on the "happy" part. I'm still very much mired in what I would call Challenging Time In Life In Which I Am Worried About Everything mode. Worrying comes naturally to me, if it were an Olympic sport I would have wrapped up the gold in that one DECADES ago. I think I actually burn calories due to the sheer force with which I worry. It's a gift. ;-)

But you know, press on we must, so that's what I'm doing. I had a very nice weekend, I can definitely look to that as a bright point. And my Mike? Oh my gosh, a GEM that one is. He has been nothing but comforting and supportive, which I of course greatly appreciate. But he also just has all of those Admirable Husbandly Qualities, you know? As he spearheaded an effort to clean out our attic (which was covered with a verifiable MESS of grit from the new roofing project that we had done last month), I was admiring his cute working form and thinking that of all of the decisions I have made in my life (some of which have been epically bad, for sure and for certain) I really made a charmed one when I chose him.

OK, mushiness aside, it was a good weekend. On Saturday, I spent some time with Anne, playing dress up: 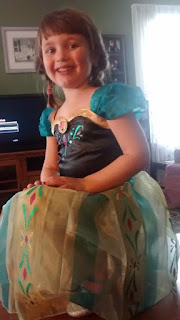 Isn't she adorable? With the braids, she really does look just like Frozen's Anna. She also has the Anna winter dress option to wear for Halloween. Little fashion princess, she is.

And suddenly, Halloween doesn't seem that far away, right? Somehow it's already going to be October at the end of this week. Thus, I am hard at work on my Christmas gift list. I have begun the annual ritual of dishcloth knitting: 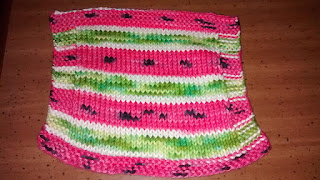 The yarn is sublime, right? I'm hoping to get 3 cloths out of the one hank I was lucky enough to snag. This yarn is in high demand! In the absence of more yarn (and I need more cloths) I'm thinking of securing patterns featuring other fruit-themed dishcloths. Apples? Orange slices? What's your favorite fruit? :)

On Sunday, the kids and I were at our usual 10 am Mass, and finally the Children's Liturgy of the Word program is back for the year.

Anne gets so antsy in Mass without that. And the bulletin (read judiciously between the start of the Offertory & Anne's return to the pew) featured a boatload of interesting announcements. The Worship Committee is meeting next week, and I'm bursting with excitement about attending. We'll be discussing a Mass of Remembrance for the feast of All Souls, and Advent preparation.

The coffee & donuts with Fr. Joe shindig is also starting back up next Sunday, and I saw Henry perk up with interest when that was mentioned. It's nice to see all of the parish activities starting back up and fall settling in.

In the afternoon, I headed happily off to a dance workshop at my studio, and considered that my workout for the weekend. And it was, indeed, a workout. It was a drilling workshop of important movements within Middle Eastern dance, plus short choreographies in pop and baladi to learn some new combinations. LOVED. I got some great new ideas and my muscles felt seriously worked at the conclusion. I have a lot of dance events coming up in the next two months, and I have to admit, I'm just the hairest of nervous about them. :0 I'm certain they will provide good stories, if nothing else. I will report in as events transpire.

How was your weekend, dear reader? Start on any Christmas crafting of late? Oh, oh, and don't forget book club on Wednesday! Chasing Francis, by Ian Morgan Cron.
Posted by Tiffany at 3:14 PM