The Church Triumphant: Spotlight on St. Isidore the Farmer 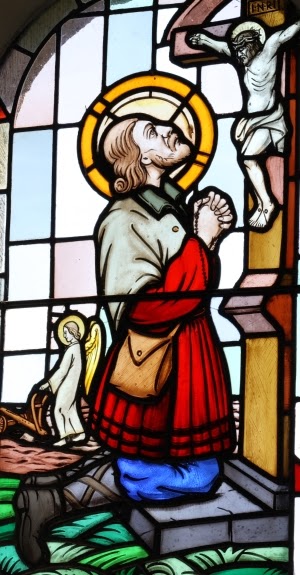 Happy Tuesday everyone, and welcome to the March edition of The Church Triumphant! I looked at my handy dandy saints calendar to garner an idea, and noticed St. Isidore the Farmer on March 22nd. I perked right up. Interestingly, his memorial is celebrated on May 15th, but apparently in the older 1962 calendar (which is used when the Traditional Latin Mass is offered) his feast was celebrated on March 22nd, hence his indication on my all- inclusive calendar. I love fascinating little facts such as these. ;-)

St. Isidore captured my attention because I've written about him before. He is a favorite saint of my Henry, and isn't it just so precious when children take a shine to a particular saint? St. Isidore's story is a simple one in many ways, and that's part of why Henry is drawn to it, I think. St. Isidore was just a guy who was a hard worker, but he loved to attend daily Mass, and that's where the story gets interesting...

St. Isidore was born in the late 11th century in Madrid. He later married, and he and his wife lost a son in infancy. Following that tragedy, he and his wife discerned that they would dedicate the remainder of their lives to God, and they chose to live as brother and sister. During the course of his daily labors, Isidore wanted to make his work sacred by prayer and attending Mass. His fellow workers felt that he was being lazy by slipping off to attend Mass and, in their opinion, sticking them with extra work, so they informed their boss of his actions. When his boss came to check on the situation, he found angels plowing the field in Isidore's stead. I love that that image always appears in St. Isidore's iconography, as you can see above. And in fact, that's Henry's favorite part of the story, the angels. Maybe he's hoping that they'll come do his chores for him sometime? ;-)

There are a few saints that Henry is always interested in when we flip open his saint books each evening: St. Maximillian Kolbe, St. Dominic Savio, and St. Isidore the Farmer. For Christmas, I bought him a St. Isidore wooden saint figurine: As soon as Henry pulled St. Isidore out of his Christmas stocking, he recognized him. :) I love the sweetness that comes from a child's devotion to a saint, and thus I have a fondness for St. Isidore as well. In fact, a few years ago he was patron saint of this blog, and that came from the random saint name generator, so obviously God has deigned him as special for me as well. :)

I very much relate to St. Isidore's desire to sanctify his work. Ever since my early 20's, I have longed for a job that was more religious in nature, but that was not to be. And so within my secular jobs, small reminders to offer things up, pray an Angelus at noon or Morning Prayer during a quiet reference shift, or attend daily Mass at lunchtime take on greater significance. Our secular work still has deeper meaning for our souls, for the souls of others, and for our relationship with God. St. Isidore is the perfect example of that.

As I was researching this post, I found that there are official prayers for a novena to St. Isidore. Score! Traditionally, his novena is prayed from May 7th to his feast day of May 15th. Maybe we should do this this year? Think about it. :) Perhaps I'll pray this with Henry this year. I'm going to write myself a little reminder in my planner...done!

Does anybody else have a devotion to St. Isidore the Farmer? Do leave a comment!
Posted by Tiffany at 12:57 PM