"OW! ANNE!! Be careful with your palm!!" Adventures with my young at Palm Sunday Mass...

AAANNNDDD so began our Palm Sunday Mass experience in a way that I can only characterize as *completely expected.* ;-) But let's rewind back to the very early morning...

I have been looking forward to Holy Week for months and months. And Palm Sunday, being the first liturgy, has a special place in my heart. :) I woke up with an actual excited feeling in my stomach that Holy Week was beginning. I got out my phone and used the Divine Office app to pray Morning Prayer. It was all so glorious I could hardly stand it. Breakfast went well, and then we did our usual morning chores and then getting ready for Mass routine. I wore red, just so that I could match the liturgical color of the day. :0 Then...

The children started fighting, which 100% of the time translates to Henry being bored and thus filling his time doing things he knows will annoy Anne, and Anne screaming at him. I was doing my best to retain my serenity and refereed them as best I could *halo*, but right before we left some act of annoyance transpired which left Anne is a huge sulk. Anne, at nearly 4 years old, has the *dramatic pout* expression and countenance down to a science. She resisted putting on her shoes and coat, and went limp when I intervened. Joy.

I got her stuffed into her car seat, Henry smirking all the way because he knew that his efforts at Extreme Sister Annoyance had borne fruit. My serene outlook was already in danger, but it all flew out the window when a disturbance in the back seat, followed by me looking in the rear view mirror, resulted in me catching Henry pulling Anne's hair, followed by Anne walloping Henry with her Olaf purse.

"I thought I told you two TO IGNORE EACH OTHER!"

*cacophony of objections from the back seat*

"ANNE! Stop that! DON'T EVEN LOOK AT EACH OTHER."

Ugh. We weren't off to a good start, but I will say that things improved greatly. We arrived to find our church decked out in all it's Palm Sunday glory: 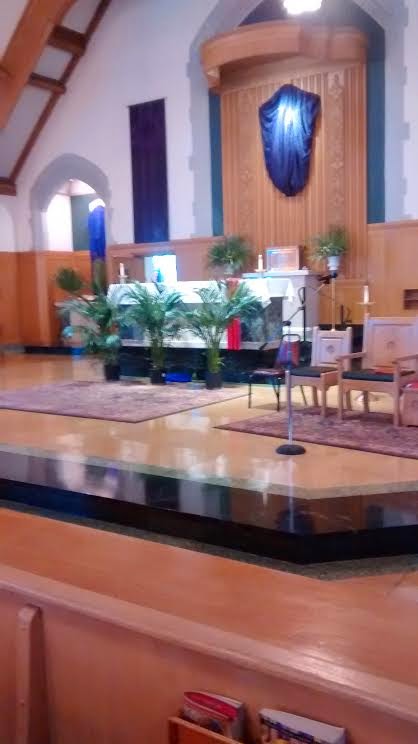 We immediately fetched palms, which Anne commandeered forthwith and nearly took my eye out.

"Honey, you cannot wave the palms around, you could hurt somebody."

"But I love the palms, Mommy."

"I know, and you can hold them, but you have to keep them down."

It was a challenge. :0 Anne got back from Children's Liturgy of the Word to announce:

"Mommy. There was a little boy back there, and he hit me with his palm RIGHT IN THE FACE."

"I'm sure it was an accident, Honey. That's why you can't wave them around."

But we all persevered, me carefully managing Anne's palm use. This was the first weekend that the statues were veiled at our parish. In the past, we've done it halfway through Lent, and next year this will be something the Worship Committee decides on. But for now, Fr. Joe is just trying to keep up with things as best he can. I do love the symbolism of the veiled statues, makes everything look all the fresher at Easter, and we can appreciate them anew.

Henry looked aggrieved by the length of the Passion narrative, but he quickly got into it. The schedule for Holy Week was in our bulletin and I happily took note of everything during the Offertory. I wish I could go to the Chrism Mass tomorrow at our cathedral, but I have a conflict. Everything else I can attend, and plan to. *beams*

As ever, the Palm Sunday liturgy was beautiful, and it really put me in a happily contemplative place for Holy Week. We chatted with our new parish friends afterward about plans for Easter Mass, I'm just so, so pleased about our new sense of community. And the rest of the day improved as well. The children seemed contrite and stopped arguing, and Mike's NCAA Tournament bracket took a turn for the better. Hey, if he wins, I consider that a victory, given that we share the same pot of money. ;-) I also worked on some craft projects, I'll have to devote a whole post to that coming up, maybe next week? Some good, some bad. Some REALLY BAD. :0 It's all part of the adventure.

How was your Palm Sunday, dear reader?
Posted by Tiffany at 2:32 PM