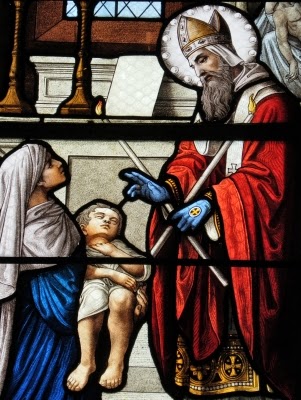 It's the last Thursday of the month (how did that happen?!) hence it must be time for The Church Triumphant! This month I chose to focus on St. Blaise. I've been mentioning him quite a bit on the blog, and his feast day is approaching on February 3rd. Plus, I've always been fascinated by the ritual of the blessing of throats surrounding his feast. What's that all about?

SO. I went and did a little research on St. Blaise to prepare for this post *adjusts glasses* He lived during the fourth century, and we all know how martyred saint stories went back then, unfortunately. Which is to say that grotesque, horrific-sounding methods of torture and execution abounded. Lovely, I know. :-\ So, we had poor St. Blaise here, and he was a physician and bishop. Part of his legend is that animals would approach him for healing, but would not disturb him if they found him praying. The authorities at the time weren't quite so considerate, and discovered by them in prayer, he was arrested for being a Christian. While in prison, he ministered to his fellow inmates and during this time performed the act for which he is most well known. A child began to choke on a fish bone, and St. Blaise saved him by extracting the bone. Hence, each year on his feast day, we invoke the intercession of St. Blaise against all ailments of the throat.

Following this endearing scene, St. Blaise was martyred. He was thrown into a lake to drown, but that didn't work out the way his persecutors imagined it would. Hence, they beat him (wool combs were involved *shudder!*) and then beheaded him. Because he was a physician, he is also the patron against all sorts of diseases and afflictions, and is one of the Fourteen Holy Helpers. In his iconography, he is depicted holding two blessed candles, which are used in the throat blessing ritual, and with a child, wearing the vestments and mitre of a bishop.

This year, I really wanted to pray the St. Blaise novena with my kids. He is a patron for children, and I thought it would be a lovely tradition to pray the novena using their intentions, and then observe his feast day via the blessing of the throats. I even got all Catholic nerdy on them and bought each child a St. Blaise saint doll in commemoration of our efforts. Henry's is painted wood:

And Anne's is felt:

Both dolls have arrived and are ready to go, and we're all excited about getting our throats blessed, but... Well, as things often go in Catholic parenting world, the best laid ritualistic plans often go awry. First, I forgot to pray the novena prayers with them on what should have been the first day, but no matter! We started the next day. Anne was all excited to light our votive candle and settle in for prayers, but Henry was very busily doing his best to distract and annoy her the entire time we were attempting to do this, and the prayers for this particular novena are a bit on the long side for kids to sit through. Neither had a compelling intention to offer when the time came, and the whole thing felt a bit like a bust. So, what I've been doing is each day asking St. Blaise to please intercede for my children, and have left the novena situation at that. :) We will observe the blessing of throats (Henry at school on the feast itself, Anne and I most likely on the closest Sunday, that's how my parish usually does it), and I will give them each their dolls with some explanation of how St. Blaise came to be the patron of throats.

So. :) Does anybody else have a devotion to St. Blaise or enjoy his feast and the blessing of throats? Are you doing anything special with your kids? Do tell me all about it in the comments.
Posted by Tiffany at 10:49 AM