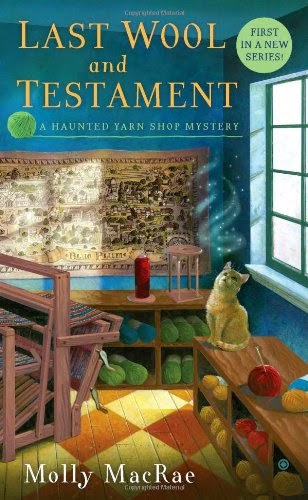 Hello everybody, and welcome to the first edition of Read and Stitch! I'm not certain this will be a regular feature, just whenever I have appropriate titles to discuss! So these posts will focus on cozy crafty fiction, knitting or crocheting. For all of you crafty readers out there, these posts are for you! I'll discuss not only a book, but a current project or two that I'm working on. Are you excited?! I am. :)

So, today I'm going to be reviewing Last Wool and Testament: A Haunted Yarn Shop Mystery by Molly MacRae. Lots of mysteries abound. :0 Let's get started!

This book sat on my wish list for ages, I absolutely loved the premise and really wanted to read it. And speaking of the premise...


Kath Rutledge is about to learn the true meaning of TGIF—Thank Goodness It’s Fiber.…

That’s the name of the spunky group of fiber and needlework artists founded by Ivy McClellan, Kath’s beloved grandmother. Though Ivy has recently passed on, the members still meet regularly at her fiber and fabric shop, The Weaver’s Cat, which Kath has now inherited. But that’s only the first in a series of surprises when Kath returns to the small town of Blue Plum, Tennessee, to settle her grandmother’s affairs.

There’s been a murder, and it turns out her grandmother was the prime suspect. Before she can begin to clear Ivy’s name, Kath encounters a looming presence in the form of a gloomy ghost. It turns out the specter has just as much interest in solving the murder as Kath. So, with a little help from the members of TGIF—and a stubborn spirit from beyond—she sets out to unravel the clues and hook the real killer.…

It had been so long time since I read the synopsis that when I started the book, and an actual ghost appeared, I was caught a bit off guard. :0 I guess I was assuming "haunted yarn shop" meant a creepy store with a chilling sense that something untoward had happened there, and the mystery was figuring out what that was. I was wrong. There is an actual ghost, who converses with Kath, our main character.

So, let's talk about Kath and her ghost. I actually...didn't love them. :0 They were a bit annoying. Kath tried too hard to be funny, and the ghost whined a lot. And it felt like nothing happened for three quarters of the story. In fact, we were *in* the yarn shop very little. Most of the "action" took place in the house Kath was staying in or other places around town. I generally like "around the town" types of books, where we meet a motley assortment of characters and get a glimpse of their daily lives, that's all good. But given that "haunted yarn shop" was in the title, I expected us to be there a lot more than we actually were. There were some interesting sequences having to do with weaving, which was Kath's grandma's specialty, and I found that enjoyable. But I definitely did not bond with Kath. And her nemeses in the book also grated on my nerves. If you read the book, just get to the Spivey twins and you'll know precisely what I'm talking about. :0

This book felt like a "set up" for a series, and in fact that is what it is. At least a half dozen other titles follow this one, and it seems to me (based upon the ending, which I will not give away) that Kath and the ghost will now be spending more time in the yarn shop. So, that could make future installments more interesting.

Thus, bottom line: I didn't love this book. I also didn't hate it, it wasn't terribly hard to finish it. It was a cute and fun read. But will I read others in this series? Likely not.

There were knitters in this book, though Kath didn't seem to love knitting overly much. I felt a bit betrayed by this, but never mind. :0 I've been very busily knitting this winter, and I have a few seasonal projects that I'm super excited about!

This January and February, Jimmy Beans Wool is sponsoring a Downton Abbey Mystery Knitalong! Can you hear it, can you hear it?!

We knew that it would be a shawl, but the pattern itself is an evolving mystery that we receive via weekly clues. LOVE, LOVE, LOVE. I ended up treating myself to the official Knitalong colors of a variegated colorway called "Edith's Secret," and then pairing it with the solid colorway of Old Rose. Here is what I have so far, midway through Clue #1: 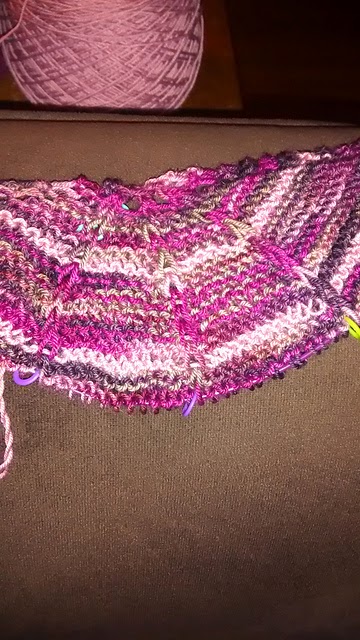 Pretty! I'm happy with how it's turning out, and I can't wait to receive the second clue on Sunday. I also recently finished a winter shawl from a pattern called "Color Affection" in what I have termed Frozen colors. Here is it unblocked: 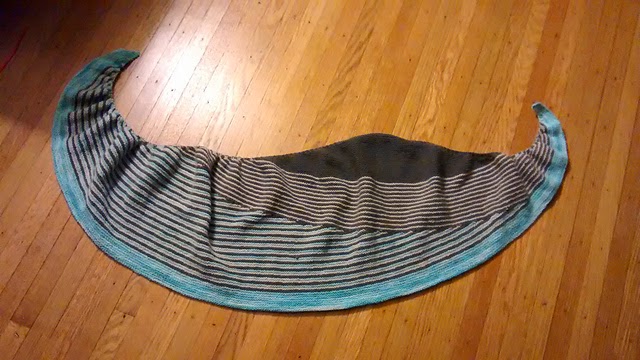 I ended up being able to get my hot little hands on a skein of the (out-of-stock) icy blue colorway which is named "Frozen" via a friendly Ravelry member. The top color is a silvery gray, and the second stripe is called "Platinum." I'm really pleased with how it turned out. I need to block it so that it will stretch out to it's full potential and wrap myself in it's warmth. :) Living where I do, I have come to realize the value of warm handknit accessories such as shawls and cowls. They really lend a lot of warmth without adding bulk.

So that's what I've been working on! Has anybody else read The Haunted Yarn Shop series, or working on any crafty winter projects? Leave me a comment!
Posted by Tiffany at 10:57 AM