I'm back, and I don't even know where to start!!

A blogging hiatus is necessary for me each year during the Christmas season, but I tell you, it throws me off. I feel all weird when I don't blog. And there was so much that happened that I am certain much of it will get glossed over due to sheer overwhelment (is that a word? it is now :)) but hey, one does what one can. ;-) I will summarize all of the family and liturgical goings on as best I can and call it My Very First Post of 2015!

I hope that you all had a beautiful and blessed Christmas season, ALTHOUGH aforementioned season technically extends until Sunday, the feast of the Baptism of the Lord. So we're still celebrating! I really, really focused on that this year, the fact that Christmas is a season and not just a single day. I think I felt it so deeply this year in particular because with small kids, Christmas Eve and Christmas Day take on a chaotic quality. But beginning with the feast of St. Stephen on December 26th, my Christmas season was absolutely sublime. :) I kept mentioning this to Mike and the kids ("Christmas is a season, we should still be playing Christmas music!!") and they humored me very nicely.

Ok, so! Last we spoke it was Christmas Eve. We spend Christmas Eve with my family, which is much larger than Mike's, hence the chaos. Earlier that day I wanted to go to Adoration to maintain a serene and sacred feel to the day, and Henry actually wanted to go with me. We made the journey out to one of the two parishes in the area that has a Perpetual Adoration chapel and...

Not so perpetual, but understandably, they had a hard time finding enough adorers to fill the slots over the holidays so they closed it for a few days. The church itself was open, with the organist practicing for the Vigil Mass that evening, so Henry and I went and prayed in there for a few minutes. Well, I prayed, and Henry prowled around :) but I thought that was just fine. He was all excited to be in the darkened church and able to find fascinating saint-related hidey holes, and he brought me over to a nook with a St. Therese statue and a candle stand. He expressed interest in going to Adoration with me again when the chapel re-opens, and I couldn't be more pleased.

So, the morning and afternoon went well. While Henry and I were on our Adoration Adventure, Mike texted me to pitch the idea that instead of our traditional pilgrimage to a Christmas Vigil Mass, in which we need to arrive 30 minutes early to get a seat and are smashed into a pew for about an hour and a half with a wiggly Anne, maybe we could consider attending Christmas Day Mass? I was skeptical at first, but he talked me into it. And how did that go? Read on, kind visitors.

So, no Vigil Mass meant that getting ready for our family dinner was easier, and Anne napped right up until we left anyway. She predictably woke up on the wrong side of her little stuffed animal infested bed, and then refused to wear the Christmas Eve dress my mom bought for her. She left the house with a pouty face. Henry was in good spirits, but you know, this is Henry's excited face:

For my part, I was wearing a black velvet dress and a snowflake necklace that I made just for the occasion: 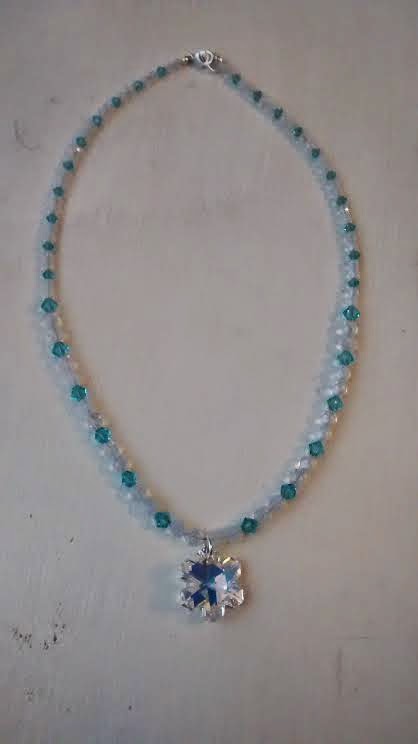 No photo of me *in* said items, Anne was making me too stressed for selfies. :0 But off we went, and dinner was lovely. I got to see all four of my nephews, including the 2 year old twins, who are so cute you could just kiss their little faces off. I'm certain that they wouldn't appreciate an effort in that regard, so I restrained myself.

Christmas morning found us opening gifts, and then headed to 10 am Mass, and can I just say, Christmas Day Mass =

I couldn't believe it when we walked in. As opposed to the Vigil Mass, which is beautiful, but suffocating, this Mass didn't even have as many people as a Sunday during Ordinary Time. And we went to our home parish, so it was just SUBLIME. Anne immediately gravitated to the large nativity set, and we went up before Mass started to adore the Newborn King. :)

Lovely, lovely, lovely. Lots of family visiting followed that afternoon and evening, and we were all a bit exhausted by the end of the day.

The kids, of course, were very happy with their gifts, as was I. I received a lot of great books, and I plan to spotlight those tomorrow. But I also received some beautiful new Catholic gifts. Shauna'h gave me this St. Kateri rosary: 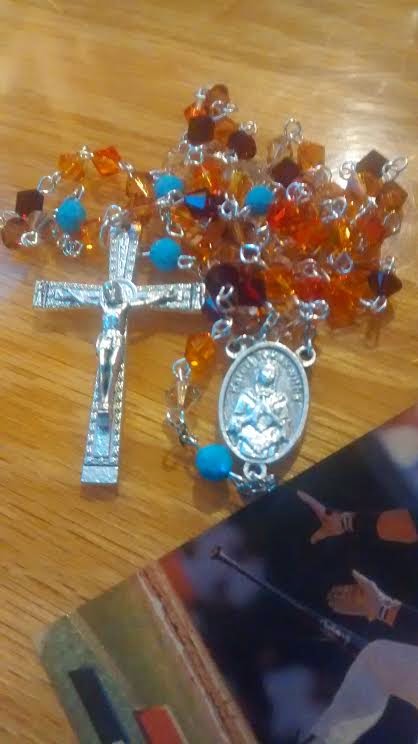 I squealed when I saw it. :0 Such fabulousness (another word I just made up...) Anne received another saint softie to add to her collection, and here she is showing off St. Therese now joined in prayer power with Our Lady Star of the Sea: 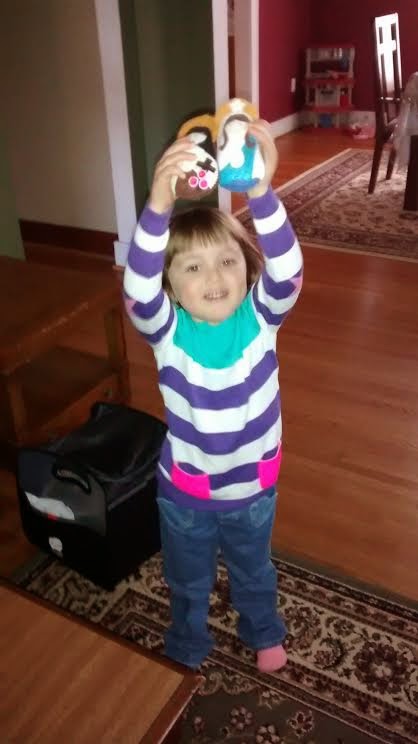 On the feast of St. Stephen, we got together with my parents to exchange gifts, and they gave me a gorgeous new iPod Nano, which I really needed, since my old one is showing major signs of wear and tear, and I rely on it so heavily for my large music collection and Catholic podcasts. She's purple, and I've named her Cecelia :0

Also on that day, we have Anne posing with our dog nephew, Roscoe: 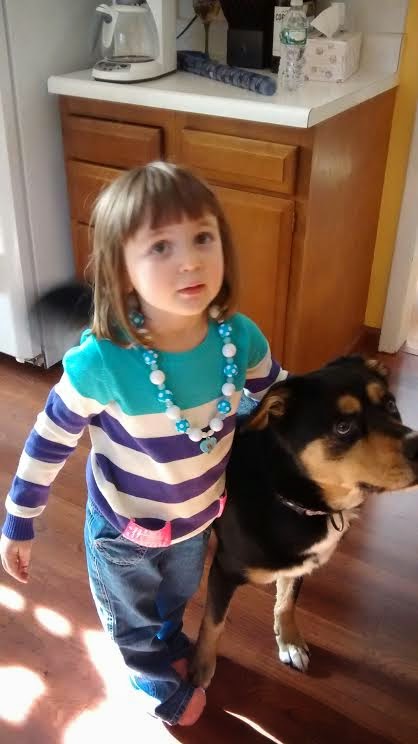 Cuteness. She's modeling her new Elsa necklace, crafted by my sister Shauna'h. We spent some more time that weekend (Holy Family weekend, appropriately :)) visiting with my sisters and nephews before everyone headed home.

On New Year's Eve we went to the vigil Mass for the Solemnity of Mary, Mother of God amid a winter storm blowing into Western New York, and coziness was experienced by all. :) I used a new cookbook that I received for Christmas to prepare potato soup in the crock pot, and we also had a shrimp/cheese/olives/bread combo spread after we returned. And on New Year's Day, Mike and Henry finished a 3D puzzle of St. Basil's Cathedral that had been one of his gifts, and just in time for St. Basil's feast day January 2nd :0

Impressive, yes? It was an absolutely wonderful week, and now here I am, back at work.

But I'm hanging in there, getting back into my routine. And can I say that I am SO excited for 2015? I have never in my (very good and happy) life felt so optimistic about a new year before. Life is good, my friends. I'm looking forward to all of the spiritual opportunities the new liturgical year has to offer, to celebrating 10 years of marriage to Mike this weekend (post on that coming Thursday!), to spending time with my family, to hopefully attending the Catholic New Media Conference in June...There is so much to look forward to. And I look forward to experiencing and sharing it all with YOU, dear reader!

How was your Christmas season so far? Do leave a comment to share it with me!
Posted by Tiffany at 1:47 PM