Your child feels called to the religious life - are you smiling or tearing up? Perhaps both :) 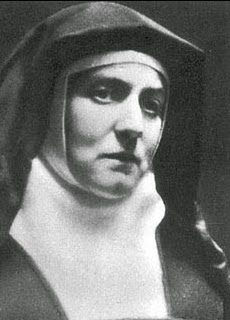 I'm being a bit tongue in cheek with the title of this post, because I think everyone who reads this blog knows how lovingly I speak of the religious life. I considered it for myself, and although that was not my vocation, I retain a HUGE soft spot for religious men and women, and monastic living. I read tons of books about it, and find the experience so very sublime.

I have in the past fielded the question of how I would feel should Henry want to be a priest. I have always answered, without hesitation, that I would be thrilled. Depending upon who is asking the question, I have received a variety of responses. :0 Some Catholics nod with understanding and agree that they try to foster an openness to a religious vocation in their children. Others may be sympathetic to the way I feel, but don't necessarily share the sentiment. A few people of various religious persuasions have said to me:

I think Catholic religious vocations seem a bit odd to Christians who do not have celibate clergy, and the nun thing seems downright mysterious. It's different from the way many Christians do things, Anglicans and Orthodox being the exceptions that come immediately to mind (though they do have married clergy, but also religious orders). And this is a fascinating sub-topic, but I'm losing my train of thought as is so often the case. :0

This response has made me think about my answer, although my answer has not changed. Sure, I would love grandchildren someday. However, there is no guarantee, regardless of what vocation they enter into, that my children can and/or will provide them. Life doesn't always work out the way we plan, no? There are lots of couples who would LOVE to have children but are not able to. So my child entering religious life isn't the only reason that they may not have children of their own. The important thing is to discern ones' vocation carefully and to do what God is calling you to do. If my children do that, I will be one happy mother.

But over the weekend, this topic came into my heart anew. A friend from social media, Mike Gannon, announced that he is joining the Carmelites. This wasn't exactly a huge surprise, I could see it brewing for well over a year now. I got home from dance class, saw his Facebook and Twitter posts about it, then went and read his blog post (linked above):

Mike found me shortly thereafter, wiping my nose as I stared despondently at my phone.

"Mike Gannon is going to become a Carmelite friar. It's GOOD! It's just...I will miss him so much on Twitter!!!"

Because you see, the religious vocations of others are all about ME and my social media experience. :0

I realized that my happy go lucky response about my son and the priesthood was based upon him deciding to become a *diocesan* priest. This is quite different from joining a religious order, where a person is obliged to their community. For both men and women, becoming a member of a religious community means that you must follow the structure and rules of your order and your superior. For cloistered nuns, and also monks, this new lifestyle is quite dramatic. It's not like a man studying for the diocesan priesthood who still has the freedom to go about daily tasks as he pleases in many ways.

I did think about this last year when someone else I followed on Twitter (and a good friend of Mike Gannon's), Channing Dale, entered a cloistered Carmelite community. I didn't even know her, but yet I very strongly felt her absence in my Twitter timeline. And although thrilled for her and for the Church, I felt a bit sad when she left. (I remember saying to my knitting friends: "Her last day on Twitter is coming up. I can't even imagine how she'll feel right after she deactivates her account. And, AND! WE WON'T KNOW, WILL WE, BECAUSE SHE CAN'T TWEET!! *sob*) And the same thing is happening with Mike Gannon, though more strongly because I "know" him better (we've never met in real life). He's a staple in my online Catholic community, and I always enjoy his contributions on Catholic life and issues. I will miss him. :(

Mike will hopefully be back on social media at some point beyond his postulancy, but it is a bit of an unknown. Channing (now Sr. Mary Magdalene of the Divine Heart) will not be back due to the specific nature of her cloistered vocation, and this made me think very deeply about something inherent in the religious life, and indeed in a vocation to marriage as well: there is a dying to self involved. It is more dramatic for cloistered religious than it is for others, but there it is. And for people who know and care for a person entering a cloistered community, there is a sense of loss there, I think. I understand that the gain is SO much greater, for everyone involved. But in our humanness, I still think that this is difficult. In terms of your daily interactions with the person, it may feel a bit like they have died. Poof! They are just gone, and you cannot simply call them to hear their voice. That is terribly hard.

For a parent, I imagine that this would be *incredibly* challenging. I'm not saying that I would begrudge my son or daughter a religious vocation, certainly not, but there are things that I would struggle with. Particularly if it were Anne entering a cloistered monastery. I would get over it, and I would be so very joyful about my child offering their life to Jesus, but I would grieve a little bit for their company, I think.

Just keeping it real here, as I always strive to do. :) I would still be thrilled if Henry or Anne felt called to the religious life, whether it be to a cloistered or active community, or for Henry to the diocesan priesthood. But there is an element of emotional pain that I think would be very real as a parent adjusting to this change.