Of swinging from pews & tantrums in the aisle - Feast of the Exaltation of the Holy Cross 2014... 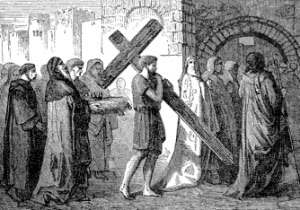 I generally like to tie the theme of these liturgical day posts around the readings, but that would assume that I actually *heard* the readings, soooooo...that can be a problem on weekends like the one I just had. :) In looking back through my Magnificat, I see that the second reading and Gospel were very dramatic in tone (the "at the name of Jesus, every knee should bend" reading from Philippians, and "For God so loved the world that he gave his only Son" from John) so that fits with the tone of my weekend, I suppose. ;) Let's discuss.

This weekend marked the feast of the Exaltation of the Holy Cross, a nice highlight to celebrate during Ordinary Time. We decided to attend the vigil Mass this week to accommodate a Sunday morning trip to the cider mill, and instead of our regular parish we went downtown to a beautiful historic church that Mike loves.

Well. It seems to me that our daughter, little Miss Sassafras Anne, behaves much poorer when we're all together at Mass. When I have the kids by myself, she toes the line pretty well. Usually. You know how that goes. So anyway, we arrive just before Mass starts, and I was all looking forward to some quiet time to pray and recollect. This church has a large and beautifully detailed crucifix near the front of the sanctuary by the votive candles, and I thought that would be perfect to use as a meditation aid for this particular feast. Doesn't that sound lovely?

Unfortunately, the moment we cross the threshold of the holy water font, Anne announces:

"MOMMY! I have to go to the bathroom!"

I try to talk her out of this so that we can at least have Mass underway before we have to depart again, but she will not be dissuaded. We find an empty pew, and Henry says that he also has to go. A real party, no? I head to the back with both kids while Mike gets our stuff settled into our pew. I couldn't find the restrooms at first, then discover that there is only a single stall unisex situation. Henry hustles in.

I stand with a squirming Anne outside the door until he is done, and then she and I go in. Only for her to sit on the toilet for perhaps 30 seconds before declaring that "the pee pee isn't coming!" Wherefore art thou, pee pee? It was hiding, apparently. And no amount of persuading was getting it to unmask itself.

I got her reassembled and washed up. By the time we get back to the pew to join Mike and Henry, Mass has begun, and the congregation is singing the Gloria. And then the real fun begins. :-\ I was looking forward to seeing the red vestments and any other special liturgical enhancements for this particular feast, but my attention was totally distracted by Anne's attempt to swing from the end of the pew out into the center aisle. Immediate ceasing of this activity brought about truculent responses and dramatic evasive body movements. When my quiet but stern lecture to her on proper church behavior resulted in the ever popular Toddler Makes Body Go Limp While You Struggle To Corral Them As They Begin To Scream maneuver, Mike scooped her up and brought her to the back vestibule for a spell. Since he holds her and won't let her down to run around, Anne *hates* this, as you might imagine.

By this point, it was the homily, so I had completely missed the readings. But I had a nice break with just Henry by my side to listen to that and recite the Creed. Mike and Anne came back around the time of the collection, during which time Anne refused to put the money in and it had to be wrenched out of her fist. When I got the money out of my purse, she noticed her forgotten little pink Lalaloopsy purse on the pew beside it. Before I can stop her, she grabs it and dumps the contents out onto the pew. Clattering out we had:

A Brillo pad;
A headband;
A keyring in the shape of an alpaca;
A plastic cracker with slice of cheese affixed;
A plastic piece of cake;
A purple toy cell phone complete with picture of Dora the Explorer on it.

She rummaged through the stuff just long enough to make a lot of noise with it, and then turned her attention to the giant pulpit positioned to our left. This church has an old style raised pulpit that's in the center of the congregation, and I've only seen it used during Christmas Eve Mass. Anne decided that it would be super fun to go over there and explore the bottom of it, which we didn't necessarily have a problem with, but then she started running in circles around the base. Yeah, NO. Her retrieval went over like a lead balloon to the surprise of absolutely no one, and by this point I was counting down the liturgical acts until we could hightail out of there. A shame, but such is the way of things when a toddler is in tow.

And the cider mill thing that we rearranged everything for? Let's just say that I'm repressing the memories from that little outing, and so are poor Mike and Henry. Going anywhere with a 3 year old runs this risk, and our luck just ran out this weekend.

When we got back from that disaster on Sunday, I decided to run some errands to try and perk myself up, and I brought Anne along so that Mike could get some lesson prep work done at home. I will say that she was actually pretty good for this trip, with the exception of trying to boycott sitting in the cart at Target, saying she's "a big girl now!"

I remedied this little situation with good old fashioned bribery, and everything was fine from that point on. We made it to Target, Carter's and the craft store, all without incident. Our last stop was at the liquor store to pick Mommy up a treat for later. ;-) We got there at approximately 12:02 pm, and in New York alcohol can't be sold until after noon on Sundays, so the place with mobbed with anxious football fans. :0 It was a humbling commentary on my weekend as I stood in line with two magnum sized bottles of wine, and my toddler shouts over to me from her perch at the display of mini sized $1.00 bottles of vodka:

"MOMMY! THEY HAVE THE CHERRY WHIPPED CREAM KIND YOU LIKE!!"

...and I don't even blink before replying:

And so that was my weekend, dear reader, how was yours? I have lots of dance news, but I'll save that for tomorrow. Belly Dance Tuesday! Come on back tomorrow afternoon if dance posts interest you. :)
Posted by Tiffany at 12:15 PM