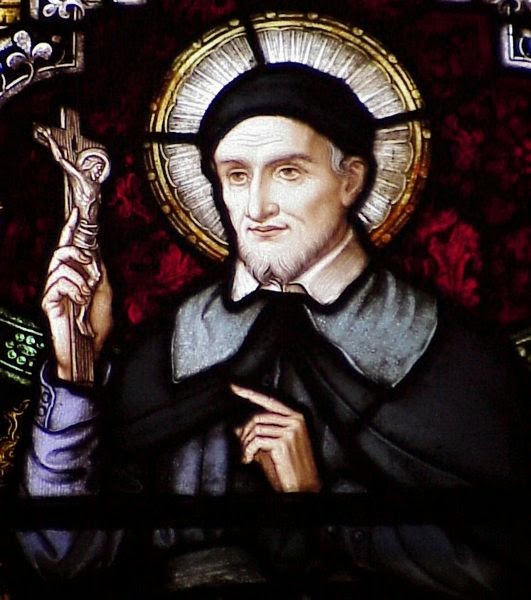 Morning everybody! I'm delighted that it's once again Saint Spotlight Thursday. :) This month I chose to highlight a saint with a feast day coming up within the week, a nice way to stay in touch with our liturgical calendar. #CatholicNerds

St. Vincent was born in the late sixteenth century into a humble peasant family in France. His family was able to secure part of his education with local Franciscan friars because they wanted to encourage his intellectual pursuits. As a teenager, he began studies for the priesthood, and was ordained at age 20.

He devoted his priesthood to ministries for the poor and the sick. He founded the lay Confraternity of Charity, the Daughters of Charity, and the Congregation of the Mission, all of which ministered to the poor, nursed the sick, and aided the unemployed. St. Vincent desired to help those who felt they had no one to turn to: outcasts, prisoners, prostitutes, slaves, homeless men and women.

From Magnificat for his feast day, we read:

"He instructed his followers, 'If a needy persons requires medicine or other help during prayer time, do whatever has to be done with peace of mind. Offer the deed to God as your prayer.'"

St. Vincent died in 1660 and is the patron saint of all works of charity.

My personal tie-in to St. Vincent de Paul is that after many years of attending public city schools, I enrolled in a Vincentian college. Founded by the Congregation of the Mission, my Catholic college has a service mission that all students were required to partake in as part of their education there. I remember volunteering at a local hospital as part of the way that I accrued my service hours, and our curriculum included courses in both religion and ethics. It was a breath of fresh air after my prior educational experiences. Which is not a dig at public education at all, because that in and of itself is a valuable service, but I came from a fairly rough middle and high school experience.

While I was a student there, my faith was not yet "my own" in an adult sense (especially if you look at some of the decisions I made during that time period, yikes!), but God was very much working in my life. Although I still found Sunday Mass a bit trying and I lacked a full understanding of what occurs during the liturgy and of the Eucharist, I discovered daily Mass while I was there. The college has an absolutely stunning chapel on campus (and it is a registered parish within the diocese, Mike and I were married there! *heart*) and I happened upon daily Mass one day. That truly changed my life. I started going somewhat consistently throughout my time there. I loved the spiritual pick-me-up of the 20 minute service, it packed quite a punch. Even in my young and naive state, I recognized that something powerful happened at Mass and I was more easily able to identify it in the shorter format since my attention wasn't wandering. An important seed was planted. Around my senior year, I stopped going, and then my faith languished a bit until my second year of law school when I had a major spiritual "reversion" of sorts that led to me becoming rooted in my faith as an adult. And what was the event that tipped the balance towards making that happen? Daily Mass. :) Different college campus, but it all comes back to the Eucharist. Thus, it seems to me that St. Vincent de Paul had a hand in me coming back to my faith, and now cherishing it.

Does anybody else have a devotion to St. Vincent de Paul? Tell me all about it in the comments. Talk to you all tomorrow!
Posted by Tiffany at 11:09 AM