26th Sunday in Ordinary Time - It's all about grace... 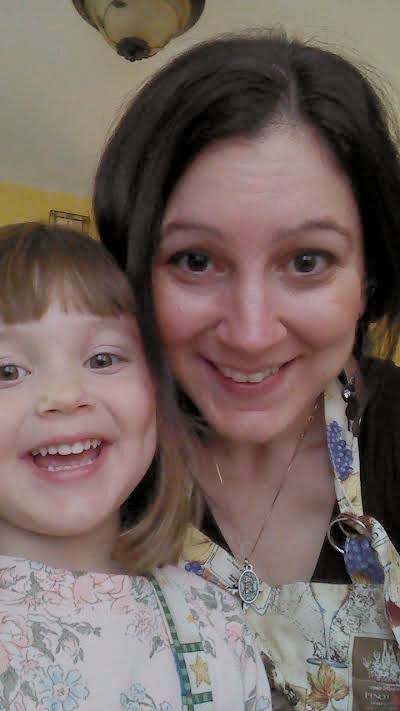 Happy Monday everyone! Although, I admit, I'm not all that thrilled that it's actually Monday. I had a meting at 9 am this morning, and I just didn't feel quite ready for work socializing yet, PLUS it didn't leave me enough time to make tea, and so now I'm on chat reference and writing this post, tea-less. That's not exactly a good combination.

But at any rate, we had a very active weekend for the 26th Sunday in Ordinary Time, which I will chronicle here. I can't leave my desk to go get hot water for tea, which seems profoundly unfair, but you go ahead and enjoy yours as you read.

Ok, so Saturday morning Mike and I took the kids apple picking. This is a fall tradition, and this year we tried out a farm that is much closer to our house than we've journeyed to previously. It was about 30 minutes away, rather than an hour, which translated into SO MUCH LESS bickering our back seat from our offspring. *sighs* It worked out very, very well. The children cavorted on a hay maze and interacted with turkeys. The turkeys were happily pecking away at several pumpkins that were hung up for their ease, and were very friendly. I found it a big discomfiting that there was a sign up advertising fresh, organic Thanksgiving turkey. :0 This is why I could never work on a farm. #wuss We all picked apples, and there was a nice variety in season. We came away with about 12 pounds of apples, some of which Anne and I used to bake an apple cobbler yesterday, see baking selfie above. :) Which resulted in this cuteness happening:

We ended up at the vigil Mass, since Henry was spending the night with his grandparents and I told him he still had to go to Mass. This wasn't exactly a popular decision with Henry, but I explained that now that he's received his First Communion, he has a lot more responsibility with regard to Mass attendance. Not attending means that he has to go to confession and tell the priest why he didn't go. That, and Mike backing me up, seemed to make all the difference, and Henry got ready for Mass. :)

Anne was actually out for a girls afternoon with my mom, so it was just Mike, Henry and I at Mass. It's been so long since I went to Mass without a sassy little one climbing all over tarnation that I almost didn't know what to do with myself. :0 I could actually *pay attention* and follow along in my Magnificat, bliss! I enjoyed the Gospel reading very much, from Matthew Chapter 21: Which of the two sons does his father's will? The one who said he would go work in the family vineyard, but then didn't keep his word, or the other who initially refused, but later changed his mind and silently went to work? God appreciates our honesty, and will always welcome us into the fold, even if we were originally pretty stubborn about the whole thing.

This related back to the Gospel reading from last weekend, and it made me appreciate the sentiment anew. The Magnificat reflection following the Mass readings was penned by St. John Vianney, and focused on the danger of lukewarmness in faith. A sinner laments his sin when his conscience kicks in. A lukewarm person, on the other hand, thinks that their relationship with God and their actions are just fine, there is no need to change anything. You suddenly develop a habit of sleeping in on Sunday mornings. "God's ok with it, He knows that I still love Him. I'll go back to church when I'm feeling better." One week becomes another, and next thing you know it's been months since you've gone and received the sacraments. But you're still convinced that God is cool with this.

Been there, done that, my friends. :0 The reflection was a refreshing reminder that even when I get down on myself about the things that I just can't seem to get right, the fact that I still keep trying to do better is a really good thing. I recognize that I continually need improvement, and this fact alone doesn't put me outside of God's grace, you know? It's actually a *good* thing.

After Mass, we dropped Henry off at my in-laws for his sleepover.  This meant that Mike and I had a few hours to go out to dinner, and we had plans to go to a local Mexican place we had been wanting to try out. We had originally planned to bring Anne with us, but she was still with my mom. You know what this means, don't you?

How was your weekend, good and gentle reader?
Posted by Tiffany at 11:32 AM