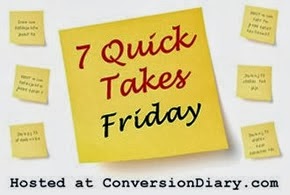 Lots of personal healing and milestones being undertaken this week at the Catholic Librarian home. And you would expect no less than lots of discreet details, no?

-1- I am officially de-swelled from my dental surgery. I am, however, sporting bruises on the lower part of my face which are forming a very unfortunate goatee pattern. The bruises are oddly colored, much darker than normal bruises, and thus makeup isn't doing too much to aid my cause. I keep telling myself that they will fade (eventually, sigh), but in the mean time I look a bit swarthy.

-2- And of all nights, I'm scheduled to go to a hookah lounge tonight (don't ask) to see a belly dancer friend perform. I'm planning on breaking out the concealer again later, but I'm not real optimistic that I'll look cute enough for public viewing. Alas, what is a post op girl to do?

-3- Henry, though, is officially recovered. He had some sort of 24 hour bug. He doesn't get sick real often, and I nurture the heck out of him when he does. I can't help it, I think it's in my DNA. I MUST NURTURE. I baked a pan of brownies that came out harder than a concrete wall, but I put a lot of love into them. Baking has just never been my forte. At any rate, he went back to school today, fit as a fiddle.

-4- And speaking of his school, we had a scary news item that we were awaiting this week. Over the past 10 years, our diocese has closed and/or consolidated a significant number of parishes and Catholic schools. It was all very heartbreaking, but I understand that population shift and subsequent financial hardship meant that there was no other option. Back in the fall, we heard that once again some schools would be closed. The diocese currently operates 51 Catholic K-8 schools, and they wanted to take that number down to 41 by the next academic year. Henry's school has a decent number of students (considering the situation, with fewer families choosing Catholic school), but over the past 10 years has lost almost 200 students in their total population number. There is also another Catholic school a stone's throw from here. We were sweating it a bit. Henry brought home the letter the other day, and his school is remaining open. Big sigh of relief there.But of course, 10 schools were not so lucky, and there are a lot of unhappy parents.

-5- And so, Anne. She is two years and eight months old, and the time is nigh. She needs to be potty trained. We've been putting it off, because, you know. We have a new couch. And we're a bit lazy. :0 We did try several months ago, and it went very poorly. As is every child who has ever been born, Anne is a bit resistant to the idea of sitting on the potty. So we did what we could this morning. We got her set up with a Dora episode, her pink potty, a salty snack, and a juice box. M&M's awaited a successful pee pee into the pot. Sometime into the second Dora episode, we heard a tinkling sound. A glance up evidenced a wide eyed Anne staring at us.

-6- The second go round didn't go so smoothly. There was an attempt at hiding under the dining room table. There was pee pee in the princess underpants. There was a request to please put the potty away. But eventually, with a bit of unabashed bribing, Anne sat on the potty again. Before the end of her show, more pee pee was produced. I'm hoping that we're *finally* getting somewhere.

-7- And so, back to my mouth. :0 I get at least some of the stitches removed Monday morning, and I'll be back to work Tuesday. You will hear from me then, with amusing updates on all matters dental, pee pee and hookah-related. Until then!

Head over to Conversion Diary for more 7 Quick Takes!
Posted by Tiffany at 2:03 PM