Second Sunday of Advent and all it's adventures... 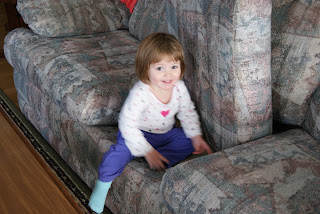 Well, my weekend was interesting, never a dull moment in my household. Saturday morning dawned with Anne clearly feeling under the weather. In fact, Anne not feeling well dominated both days and nights of our weekend, with the telltale signs being:

(1) lots of sneezing and a runny nose,
(2) a small fever,
(3) poor sleeping,
(4) diminished appetite, and
(5) marauding around the house doing nothing but (a) sobbing, and (b) throwing things.

It was a long weekend, to say the least.

I didn't know if I was even going to make it to Mass Saturday morning for the feast of the Immaculate Conception, she was just so miserable, but she settled enough for me to feel all right about leaving her with Mike (meaning, I didn't feel guilty about leaving him alone to deal with such a painful situation!) so that I could go. I went, and it was lovely.

Later, she actually seemed to perk up a bit, her fever went away, and she was drinking liquids like a champ. Mike wanted to go to the vigil Mass for the second Sunday of Advent, so we packed up both kids and went. Hence, I did end up doing 2 Masses in 1 day. :) But honestly, they felt so different from each other. It also helped that I went to 2 totally different parishes. For the vigil, we went to a historic church downtown that Mike loves. Both children were good, aside from Anne dumping her Ziploc baggie of small snacks onto the floor while we were standing up to recite the Creed. I was picking up stray raisins for the rest of Mass.

But it was really beautiful, and I'm so glad we went. By the overnight, Anne was back to her crankfest. She was a bit hoarse and was obviously feeling parched, because when she demanded my presence at 5 am in her bedroom, our conversation was as follows:

She doesn't like to take no for an answer, that one. I think she is also getting a new tooth, because she's been drooling up a storm. This all led to an absolutely ABYSMAL night last night in which Anne demanded milk, threw herself onto the floor, and cried for what seemed like 30 straight minutes, all *while I'm holding her and trying to soothe her*. It was ugly.

So I'm recovering a bit today. :) She was still on a rampage this morning, so not much has improved in that regard. We'll get there.