Things are much more subdued in my knitting life this year (as opposed to last year's frantic dash to the finish line) but I've still been very busy in the evenings. I thought I'd post a few of my recent creations.

I love knitting a warm wool cardigan for Anne each winter. This year, I used the yarn from a wool sampler that I had bought, so it was a nice way to use up single balls in different colors: 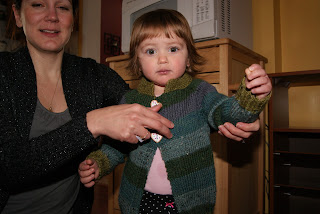 And I made her some mittens to match her cupcake hat: 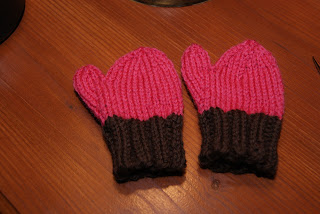 This bunny lovey is for her Christmas stocking: 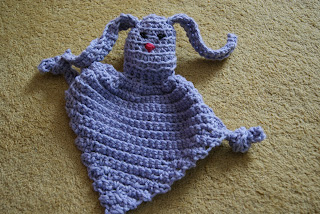 I hope he doesn't look too angry, does he? Mouth embroidery is not my forte. I have a stuffed hippo that Henry asked for in the works as well. I had to change patterns on that one (the first pattern looked great at first, but once I actually started crocheting I realized that it was hieroglyphic-like in its instructions; once the f-bombs start flying in my head, I know that I need to change patterns, that's very reasonable, is it not?) but the re-started hippo in the new pattern looks fine so far.

I'm also knitting away on my sweater. When I went to Maine, Mike was teasing me about the sheer volume of yarn that I packed, and how much consideration I placed into each individual ball that I included.

He was right, of course. :) But I did knit a lot in the airport, so it was ALL worth it.