Balm for the soul 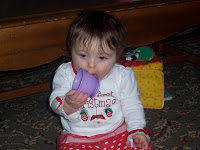 Work has been a bit stressy for me lately, and last week was just intense. This week isn't looking to be a good deal better, but I'm trying to look on the bright side. The beginning of the semester is always the toughest part.

But yesterday, Anne had actually slept in (not that she slept through the whole night *snorts* but she slept until 8 am after her 5 am waking) and hence she was awake during the 10 am mass timeslot. Normally, she's napping when Henry and I are at Mass. And I didn't have to lead Children's Liturgy of the Word yesterday. So I packed her up and brought her with us.

I can count the times I've had both kids at Mass by myself on one hand. It's a bit of a terrifying proposition. But Anne is actually at a good age for Mass attendance. For the time being. Because around age 1 the balance tips again and that nightmare scenario in which your child holds the congregation hostage with his or her screaming becomes a reality once again. But for now she's past the unpredictability of the newborn stage without being at the temper tantrum age.

And she was so, so good! She looked around happily for the entirety of Mass. Henry was a bit antsy, and he's just so "in your face" with her, I had to settle him down a bit. But overall, it wasn't terrible! A big sigh of relief was had by all.

It was nice. It actually feels wrong for me to go to Mass by myself, without either child or Mike. Even though Mass-related child wrangling isn't an easy thing, I'd much rather deal with that than be without any of them.

After that, Anne took her nap and Henry and I made a run to the craft store and to Target for a few things. Then we had some family over to watch the Super Bowl and ate lots of deliciously fattening food. And I felt so much better yesterday. Things at work can make me feel anxious, but they aren't my LIFE, you know? I shouldn't worry about them so much.
Posted by Tiffany at 9:33 AM

Email ThisBlogThis!Share to TwitterShare to FacebookShare to Pinterest
Labels: Catholic, Mass with children