Yesterday, I went for my "big" 18 week ultrasound. Baby CL was very mellow in there, and seemed a bit put out that we interrupted his/her morning nap. :) He or she was snoozing on their belly, and wasn't too happy about having to roll over for the ultrasound technician. But, we finally secured cooperation. He or she has an *extremely* adorable face: 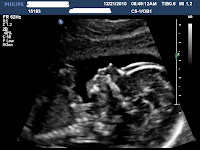 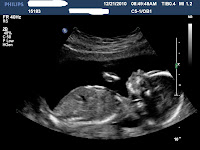 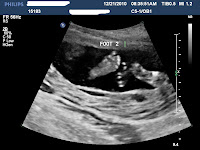 No, we did not find out the gender, although the perinatologist wanted to know (apparently, females fare better than males in preterm labor, so they like to have the information just in case) which I wasn't altogether thrilled about, since it is now on my chart. But they put a specific warning on there that the patient does not want to know the gender; I hope that they don't slip up. :)

I will grant, when she was looking at the bladder, I saw a partial money shot. One would think this would mean that I know whether the baby is a boy or girl, right? Wrong. I Googled pictures when I got back online, and honestly, the subleties are a bit lost on me. :) It's not at all like adult genatalia. For one thing, I only saw things from kind of a "below" shot, focusing on the legs, not a frontal full-on. There is something there for both genders that protrudes a bit, the scrotum for boys and the labia for girls. So, unless you have a trained eye, or an angle that specifically shows a penis, I think it's hard for the average person to tell. Plus, the absence of a penis does not necessarily mean the baby is a girl. It just might not be developed enough to be visible yet, or you may not have the correct angle.

So, that's that. :) I don't anticipate another ultrasound for the duration of the pregnancy, so we'll know the baby's gender in mid to late May.

This time, we also got to meet with the perinatologist, and I liked her quite a bit. She was real peppy, with a fun southern accent. She gave us the full run-down on the procedures that I've undergone so far, which I found quite fascinating.

Second trimester ultrasound/anatomy scan: In all of the cases she has seen in 30 years of practice, anytime a woman had a baby with Down Syndrome, she has seen "markers" on this ultrasound. An enlarged heart, other cranial or facial clues. In my case, they saw nothing.

Of course, she had the disclaimer that she cannot tell us with 100% certainty based on these two procedures that our baby doesn't have a chromosomal abnormality. However, in her opinion, our baby looks healthy and thriving, and she would not recommend an amniocentesis. I didn't want one anyway, but it was good to hear her say that. I also loved that she put "advanced maternal age" in little air quotes. That made me want to hug her. :)

As we were finishing up, she mentioned that she does not do high intensity monitoring in late pregnancy for women under age 40, and she considers me "just any other healthy pregnant woman."Did I mention how much I like her?

As we were leaving, she said "maybe I'll see you again..." and I thought she meant for another ultrasound should something unexpected arise, but she finished "if you come back for number three. People often tell me, 'oh no, we're stopping at 2!' but I tell them, 'I don't care what you do, you never know!'" I just really, really like her. :)

I'm kind of expecting the "are you interested in having your tubes tied?" question to come up when I get closer to delivery, from my regular ob/gyn office. They already think I'm eccentric enough by my lack of artificial birth control, so I'm sure my emphatic "NO" will not surprise them. Despite not being an NFP-only practice, they're very accepting of my Catholic ways. :)

I won't be posting until next week, as I'm taking off from work tomorrow through Tuesday December 28th for my family Christmas celebrations. I'll post when I return! And, MERRY CHRISTMAS!!!!!!!!!!!!
Posted by Tiffany at 1:19 PM

Email ThisBlogThis!Share to TwitterShare to FacebookShare to Pinterest
Labels: pregnancy