An evening with Henry, and that pesky last 5 pounds... 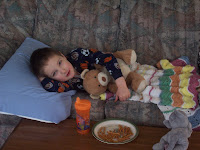 Since the holidays, I've been trying to lose a few pounds. The thing is - what woman isn't? It seems to me that men are never trying to lose 5 pounds. Some may be trying to generally lose weight and get in shape, but for the most part they don't obsess about the number on the scale the way we women do. It's just one of those male/female mysteries. At any rate, like every other woman alive, I've been trying to lose various amounts of weight at various different times in my life.

I've never been overweight, although I do weigh more now than I did when I was in high school. However, I wear a smaller size, I eat better, and I exercise more, so overall I think that I look and feel healthier. At one point when I was in college, I gained 10 pounds. I got on the scale one day (it's always a bad sign when you realize that not only haven't you weighed yourself in quite some time, but you are now actively avoiding doing so), was horrified, and rectified the problem within a month by cutting back on fattening foods. Ah, those were the days. Those days when I was like 20 years old and merely no longer looking at the Oreos in the cupboard meant that a pound dropped right off my hips.

After that, my weight stayed consistent until I graduated from law school and was studying for the bar exam. Scale - wherefore art thou? Certainly not a part of my morning routine, no sir. I remember consuming a LOT of Cheez Its during this interim. Think: industrial sized portions. During that exact period of time, I had a doctor appointment, and I actually refused to be weighed. This was unprecedented territory for your introverted Catholic Librarian. I wasn't obnoxious about it, but I remember the interaction quite clearly.

"Could you step on the scale for me?"

*nurse raises eyebrows* "Why not?"

"Well, I'm studying for the bar exam right now and I'm under a lot of stress. I know that I've gained some weight, but if I find out right now exactly how much that is, I know it's going to upset me. And if I'm upset, this will disrupt my studying and I'll fail the exam. So, you can see how crucial it is that I not be weighed right now."

The logic seemed perfectly clear to me, no? The nurse wasn't happy about it, but she did let me slip away unweighed. And I tell you, after I took the exam and did weigh myself WHOA BABY.

In my whole adult life, I'd never weighed this much (and I never have again, aside from when I was 9 months pregnant with Hank.) I wouldn't classify myself as tall, but I'm still slightly above average height for a female, I believe, at nearly 5'7". I carried the weight decently (meaning I hid it well) and so I wasn't really prepared for the number that appeared. I swear it, I saw stars. I walked around in a stupor for the remainder of the day. I had gained 28 pounds over the course of the previous year.

And the worst part was, I didn't take it off right away. When I went back to work, I knew I had to do something because we had formal business attire requirements, and my suits were cutting off my circulation. And the panty hose - well, let's just not talk about those. It was *bad*. I put forth a bit of effort and lost about 7 pounds, but after that I became complacent. My suits stopped threatening my life, and in my clothes (that is, those that I bought in a new larger size - the only time in my life I've ever done that, and I'll never do it again) I didn't look any differant than I did before, so it just didn't seem all that dire.

After I met Mike and we started dating, I decided to renew my efforts. Over the course of the 10 months that we dated, I lost an additional 7-8 pounds. After we became engaged and began planning our wedding, I lost 10 more pounds. I never got back down to my original high school/college weight, but overall I lost 24 pounds and without a doubt I was (and am) smaller overall because I have more muscle mass and wear a smaller dress size.

Soon after Mike and I married, we were expecting Henry, and I gained the doctor recommended 30 pounds. After I had him, I really lost the weight right away, aside from 3 pounds or so. (the whole issue of the way your body looks and redistributes weight after a pregnancy is a topic for a whole 'nother post - not that it's bad! it's just...different). I was pretty pleased with that, all things considered. Breastfeeding is a wonderful thing for so many reasons, and one of them is that it burns fat like a house on fire. We are truly wonderfully and beautifully made by our God :)

Anyway, I digress. Since then, I have gained just a few pounds. I'm 5 (ok, 6) pounds more than when I was married and I'd like to lose that. I have lost a few and I'd like to keep going. The tough part for me now is motivation. I'm actually pretty happy with the way I look; when I had put on that significant amount of weight before I wasn't happy and I felt sluggish, so therefore I had that as motivation. Now, I feel good about the way I look, particularly since I have had a full term pregnancy in the mix, so it's harder to get motivated to lose this pesky 5 pounds.

But I'm trying. If I do have another pregnancy, I'd love to be back where I was when I conceived Hank. And it's just a small amount of weight, so it's doable; right? Sigh. This whole female metabolism thing is monumentally unfair.

So today, my lunch was so super awesome that I just had to share. I brought in some fresh strawberries, some low-fat cheese (Cabot 50% light - I swear, it's actually decent. But whatever you do don't get the 75% light. Apparently that extra 25% is crucial to assuring that the cheese doesn't taste like tire rubber), Triscuits, and...*drum roll* The most awesome lunch snack EVER. A 100 calorie pack of Wholly Guacamole. This stuff is *awesome*. Totally, totally wonderful. I dipped my Triscuits in and nearly swooned. I *must* procure more.

I'm also trying to bump up my physical activity. Work has been so busy that I've gotten away from daily walks, and I'm getting back into those. As well, I like to run, but I often don't find the time to do it on the weekends. I made time last weekend, and I'm going to continue to do so. I also need to watch my cholesterol a bit, and exercise is ever so important for that reason too.

Ok, Henry. Adorable anecdote. Last night, he received one of his Easter gifts early as a reward for sleeping in his big boy bed the entire night 3 nights in a row. As you know, we've struggled for nearly 2 years to get him to stay in his own bed the whole night and not come out to sleep either on our bedroom floor or the hallway. He's really into his Fisher Price Planet Heroes lately, and I found their Solar Quarters (on clearance!) at my Toys R Us, so I grabbed one. I gave it to him last night and he was beside himself with excitement.

We put batteries in it, and when you press a button, some sort of Planet Heroes commanding officer spouts out instructions. Hank quickly absorbed these.

As I was in the kitchen cleaning up after dinner, Hank comes running in:

"We must launch the turbo shuttle!"

Desperate times call for desperate measures.
Posted by Tiffany at 10:48 AM