A day in the life of a marriage...

Yesterday was one of those evenings that I think demonstrates very nicely an inside look into a real marriage. I'm very happily married, and I treasure each and every day that God grants me to live in this contented state with my beloved spouse. Naturally, although the good far outweighs the challenging, there are moments that are not so rosy. Mike and I are at a point in our marriage in which we know each other so well that we are aware of, and implement, behaviors that please each other, and avoid those that don't. Additionally, Mike and I both have a personality that is truly unsettled if we know that the other person is upset or angry, and we rarely argue. However, nobody is perfect, and sometimes we still do things that bother the other.

Last night, I came home all emotional. *snorts* Mike is quite used to this. I'm an emotional person by nature; it's just the way God made me :) I am super, *super* sensitive, and in any way drawing attention to myself turns me into an emotional puddle. I was really upset with myself yesterday that I accidentally sent that email message to a whole group of my colleagues instead of just the one person that I intended. This makes absolutely no rational sense, because the message was totally inconsequential, simply asking for assistance with a project, and other people make this mistake all the time, but all of this makes no difference to your touchy Catholic Librarian. I still hated that I called attention to myself in this way. If I could be invisible, I would be, I just can't help it.

Before I left work, I sent around an email to the same group making fun of myself for clearly losing the mental ability to control my own email address lists. Whenever someone else does this, I always get a good laugh out of it and think to myself that the person is a very good sport, so I felt better after that. But still, by time I arrived home, I was just feeling out of sorts and vulnerable.

Que: wine. I immediately poured myself a glass and started sipping. It relaxed me, but it also made me even *more* emotional, which I'm certain you can already see is not a good thing. I started making dinner and Mike came in to chat with me. That helped, but I continued to sip more wine and hence become *more* emotional.

Dinner took longer than I anticipated, and by time it was nearing readiness it was at least a half hour past when we usually eat. I had never made this recipe before, and there was WAY more liquid in it than there should have been for a rice dish. I implemented my usual strategy of popping a top on the wok and praying that it cooked down.

Meanwhile, Mike wanders in, starving. He keeps inquiring as to how long it'll take, because originally I had told him dinner would be ready by 5:30. It was now nearly 6 pm. I tell him that it'll be about 5 more minutes and peer under the lid. Still a LOT of liquid to be absorbed. *sigh* I turn the burner off and hope that it'll just absorb without the heat.

At 6 pm, Mike comes down and crankily asks if dinner is ready yet. I glower at him, tell him to just go ahead and eat, and head upstairs where I burst into tears. Of course, none of this actually has anything to do with poor Mike. Our spouse, the one whom we love above all others, is always the one that bears the redirected brunt of our full emotions. It's just part of marriage.

I sniffle up there for a few minutes wondering if Mike is going to come looking for me. He doesn't, because he knows me very well and knows that I will simmer down if I'm left alone for a few minutes. This of course, pisses me off royally.

I change into comfy clothes and sniffle my way downstairs where I proceed to not talk to Mike, my usual "make him pay" strategy of choice. He compliments me on dinner, and I refuse to respond. After we finish eating, he gets up to do the dishes, which also somehow annoys me.

I go into Hank's play area to snuggle with him, and this cheers me up a bit. Mike finishes the dishes and starts running a bath for Hank, and inexplicably this also makes me mad for no discernible reason. Finally, after both Mike and Hank come back down following the bath, I come out with it:

"You hurt my feelings."

If you can believe it, I've actually gotten *better* about communicating when I'm hurt about something to Mike and in a more timely fashion. This is actually *sooner* than I would have fessed up when we first got married. Of course, Mike looks totally flabbergasted that I'm even still thinking about the dinner fiasco because he's totally forgotten about it already.

"Oh, Sweetie, I said I was sorry. You're not still upset about that, are you?"

"Well actually, yes I am. I'm not having a good night, and I was trying to make a nice dinner for us, and sometimes that takes longer than 20 minutes. If you're starving, then have a small healthy snack to tide you over until dinner is ready on nights like this."

Once again, I've improved here. In the past, I wouldn't fully articulate everything that I was feeling and upset about, and Mike would have no idea how upset I really was about something. This way, even though I'm sure he still thinks I'm a bit nuts, he can rest assured that I've expressed everything that I was stewing about and we can just move on.

"Ok. I'm sorry I was so impatient; I was just really hungry and looking forward to dinner."

"Ok. I know that I'm really emotional tonight, and that's not your fault. I'll try to feel better."

That was the end of that. And I did truly let it go, another improvement. Because I recognized that I was taking out my hyper sensitive state on Mike when he really hadn't done anything wrong. I continued to be a little touchy for the rest of the night, but I also recognized that it was one of those things that after I got a good night of sleep, I'd totally feel better in the morning.

And I do. And I gave my sweet husband a kiss this morning and assured him that I'd make it up to him with a fabulous weekend :) But see the interesting male/female dynamic here? Woman upset about something; man inadvertently hurts woman's feelings; woman feels unappreciated; woman wants man to understand, but man has already moved on; woman feels even more hurt. Whenever Mike and I have a disagreement (and it's not that often, granted) this is *always* the pattern that is followed. Like, every single time. It's quite amusing when looked at from afar the following day; not so much in the heat of the moment :)

At any rate, I did crochet last night, so I thought I'd share. This blanket is a UFO from, I swear it, about 15 years ago. I started it way back when I first started crocheting as a teenager, and just never fully finished. I lost the pattern, so that didn't help its cause. Finally, I pulled it out and figured out a way to finish the current row, and since it's already gigantic sized (another Catholic Librarian-ism; everything that I make is huge, including Henry) I just tied it off. I call it Springtime in Coral: 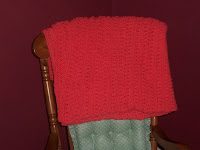 I also finished a scarf for my sister Rhonda for Easter that I call the Sweetheart Scarf: 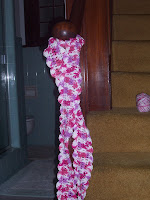 Mike identified it as having a Valentines Day theme going on, and I think he's right. It's really pretty.
Posted by Tiffany at 9:52 AM