The book club poll is open!

Well, look at that, I remembered! We'll ignore the fact that it was a bit of a close one - I remembered as I gulped down my lunch at my desk and was mentally berating myself for not yet thinking of a blog topic for the day. But hey - we'll take it!

There is now a poll along the right side margin of the blog. If you'd like to read along for a summer book club, please do go and vote! The poll is open for about 2 weeks. Unfortunately, Blogger does not have the functionality added into the poll widget to add links (boooooo!), but I have all titles, series and authors listed there for easy copy/pasting into Amazon. And I'm going to briefly talk about each here with the links as well. Let's chat!

I kept 2 of the books we talked about previously during Tea Time, and I tweaked 2 of the others.

First up we have The Well, which is historical, scripture based fiction: 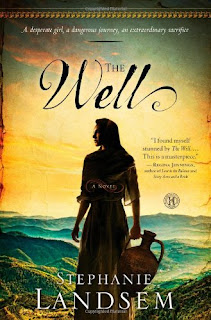 In the rich tradition of Francine Rivers’s Lineage of Grace series, comes a beautiful retelling of the biblical story of the woman at the well—bringing to life this poignant young woman struggling to survive love and heartbreak.

Could he be the One we’ve been waiting for?

For the women of the Samaritan village of Sychar, the well is a place of blessing—the place where they gather to draw their water and share their lives—but not for Mara. Shunned for the many sins of her mother, Nava, Mara struggles against the constant threats of starvation or exile.

Mara and Nava’s lives are forever changed with the arrival of two men: Shem, a mysterious young man from Caesarea, and Jesus, a Jewish teacher. Nava is transformed by Jesus, but his teachings come too late and she is stoned by the unforgiving villagers. Desperate to save her dying mother, Mara and Shem embark on a journey to seek Jesus’ help—a journey that brings unexpected love and unimaginable heartbreak.

We talked about that one during Tea Time. The other historical fiction option is The Secret Healer: 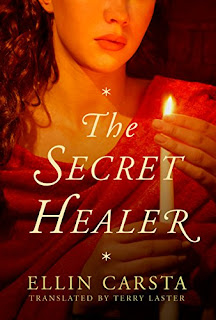 Will Madlen’s gifts bring about her downfall? Or can love and reason prevail in a time of fearful superstition?

I'm not certain whether the treatment of the Church in this one would be positive or negative, so that's a consideration in voting, for sure. It certainly is an intriguing premise, though.

For contemporary fiction, instead of How Firm a Foundation (which is a long book at over 500 pages), I decided to add in Pillar and Bulwark, which is book 2 in that series. A little unorthodox, I am, but book 1 would be a re-read for me, and I have to be honest and admit that the length made it a daunting summer read choice for me. Book 2 is somewhat shorter (still 400 pages, but a little shorter!), and the premise really grabs me: 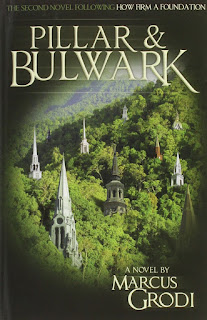 After nearly losing his life to an assassin, Stephen LaPointe resigned from his pastorate as a Congregational minister. He made this radical decision as the result of a crisis of truth. This decision had many immediate ramifications for his vocation, his career, and most significantly for his marriage and family. Now a year later, no one knows where he is. He has disappeared. Out of love, as well as remorse, several people an old friend, his estranged wife, and a potential enemy set out separately to find him. This is a story of conversion of heart, of mind, and of love.

The story really sounds like it will stand alone, to me. So I do not think anyone would feel lost not having read book 1, and honestly, it's been so long since I read it, that it's like I'm reading this one as a stand alone.

Finally, instead of an Amish book, I thought a cozy fiction option would be nice. And so we have an installment in the Cat in the Stacks series, Arsenic and Old Books: 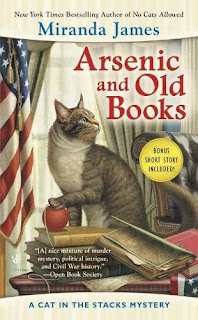 Lucinda Beckwith Long, the mayor of Athena, Mississippi, has donated a set of Civil War-era diaries to the archives of Athena College. She would like librarian Charlie Harris to preserve and substantiate them as a part of the Long family legacy—something that could benefit her son, Beck, as he prepares to campaign for the state senate.

Beck’s biggest rival would like to get a look at the diaries in an attempt to expose the Long family’s past sins. Meanwhile, a history professor is also determined to get her hands on the books in a last-ditch bid for tenure. But their interest suddenly turns deadly, leaving Charlie with a catalog of questions to answer. Together with his Maine Coon cat Diesel, Charlie must discover why the diaries were worth killing for before he too reaches his final chapter.

This title is book 6 in that series, but cozy fiction titles always can stand alone, so I think it would be fine for us to jump in at this point. I've read book 1, and this particular installment really grabbed me with the premise.

And so we have 4 contenders. Two have female protagonists, and two have males; 3 are either inspirational or religious-based fiction, and 1 is secular, so a nice mix. All of these books are available both in print, and as ebooks, so you'd have your choice, and can see if your public library has them in either form. What do you all think?! Go ahead and vote!
Posted by Tiffany at 2:51 PM