Hanging out in Maine with family, friends and lots of bugs :0

Hello all! Very nice to be back with you on this last day of May. We're fresh from a family road trip to visit my sister, brother-in-law, and nephews out in Vacationland. And apparently, many people do indeed vacation in Maine, especially on Memorial Day weekend. :0 Let's chat highlights, and also what is coming up here in terms of the blog and the Tea Time podcast! 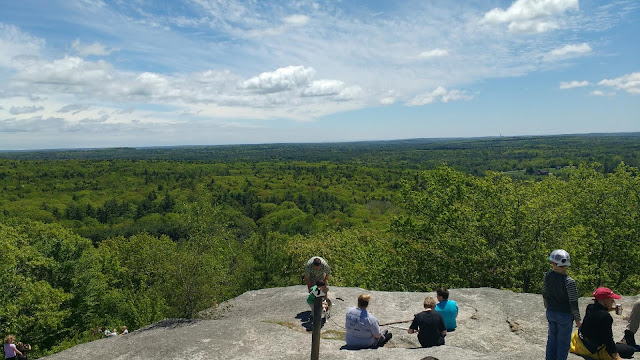 I love New England, particularly Maine given that my sister is located there, and I was looking forward to lots of fresh air and inspiration, which I received in droves. We embarked on Friday, with apparently the rest of the UNIVERSE who were also driving to Maine Friday afternoon. Things were fine all the way across farm country in New York State. Then we got to Massachusetts, and while I spent the first interlude on the Mass. Turnpike squealing over the little pilgrim hats that adorned the exit signs, we were soon embroiled in The Traffic That Would Not End. With antsy children in our backseat, we inched along through Massachusetts and New Hampshire. All of these people were going to Maine? Apparently they were, and they all exited at Kennebunkport. Who knew?! Meanwhile, our 8 hour trip was going into hour 11:

Henry: "I can't believe we've been in the car this long. I think I'm actually GETTING USED TO IT." *despondent*

But we made it, if a bit whiny. Over the weekend, we hiked, gazed at the ocean, camped, and procured vast amounts of seafood. The kids, in particular, enjoyed the camping part. I did too, especially because camping in this instance involved a cabin with a deck wherein we drank beer and played card games, but I have to admit that I was unprepared for The Bugs. We're city (albeit small city) dwellers. We normally do not have to, quite literally, coat every millimeter of available skin, including our faces, with the most toxic bug spray on the market, but there you have it. It was intense. And over time, the bugs clearly gathered and conferenced, because their efforts only intensified, despite the absolute force field of bug repellent that we were putting forth. It was so, so lovely to see the kids playing outside and with their cousins, though, rather than playing video games. The bug defense was worth it!

While I was there, Shauna'h and I also recorded a special edition of Tea Time. It's only audio (no video this week), and it's longer than usual (about 30 minutes), but I am SO STOKED for you all to hear it! In it, Shauna'h and I talk about faith journeys, and she shares with us her experience in formation with the Third Order Franciscans. I was very inspired by her words, and I hope that you will be too! That will be out on Friday. *beams*

Everyone was super sad to head home yesterday, especially the kids. They had a great time hanging with their cousins. I am hoping that we can go back next summer! Henry has announced that he would like to move to Maine, so we'll see how that works out. ;-)