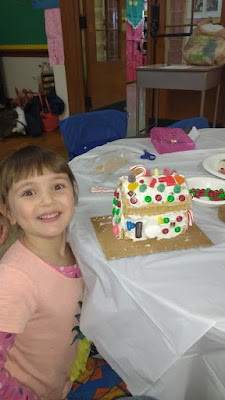 Did you all light your rose candles this weekend? I wish I could say that I did, but as has been epic this Advent, I FORGOT. I'm going to try to remember tonight.

But Anne and I DID wear pink to Mass yesterday, and she and Henry both remembered (at my prompting) to bring the baby Jesuses from their nativity sets with them for a special blessing that our parish does this Third Sunday of Advent.

Mass was particularly peaceful this week. Anne was very excited to bring up our gift to put under the Giving Tree, and Henry was very into paying close attention to the altar servers so that he could mentally review for his next serving Mass. He also went back into the sacristy afterward to solidify his place as a server for the 11 am Christmas Day Mass, and I'm *very* excited for this.

I think that I keep forgetting about the Advent candles because of how busy our weekends have been of late. This was Henry's second play performance weekend, and we also had a gingerbread house building event with Anne at school. Translation: Anne ate gumdrops while Mike and I got frosting all over ourselves and the table. But in the end, we managed a serviceable house.

It was a great weekend. And then, at 4 am this morning:

It was Anne. I was unconscious. Mike goes in to discover Anne heavily wiggling a loose tooth. He tells her to leave it alone until morning. Oh the level of parental naivete in the dark hours.

Mike, bless his soul, goes in again, while I toss and turn in our bed. Anne's tooth has fallen out. He tucks it into a paper cup and tells her to go back to sleep. The Tooth Fairy will come in the NEXT overnight session.

WHY GOD, WHY?! When I think about the sheer volume of sleep that I have lost owing to my offspring's after hours shenanigans, I want to weep.  I turn on the light while Mike goes to investigate. Anne has lost her lost tooth.

A massive toothhunt gets underway, because even at 5 am we know that telling Anne to go back to bed and we will find it in the morning will have the effect of tears and wails.

The tooth was eventually located amongst her sheets and we all went back to bed. But let's just say that the aftereffect exhaustion remains. The Tooth Fairy will be on a flying mission tonight.

Aside from being tired, I'm in good Advent spirits. How are you this Advent Monday, dear friends?
Posted by Tiffany at 1:07 PM