Adventures in the arts this 2nd week of Advent...

Happy feast of St. Nicholas everyone! :) I am coming off of a SUPER packed weekend with the kids, journeying to various productions in the performing arts. I just love this time of year. *heart*

Henry, in particular, had a REALLY big weekend. He was cast in a kids speaking role for our local community theater's production of "Get Smart," which had its opening weekend this past Friday. AND he had his very first ever experience as an altar server at our parish's 5 pm vigil Mass for the 2nd Sunday of Advent!

I was really worried about the play, because Henry is a more reserved child. On top of that, he has struggled with a speech disfluency (commonly known as a stutter) for a number of years now, and so this was a big undertaking for him. That usually is only an issue (when it even is an issue, which isn't all the time) in conversational speech, so I was cautiously optimistic for reciting memorized lines. And indeed, he did GREAT. We are all very proud of Henry. Going to all of the rehearsals, memorizing lines, helping out with scene changes, performing his role...that's a lot for an 11 year old. Very impressive!

And right before the Saturday show, he had his inauguration as an altar server. :0 Mike and I were beaming with pride as Henry made his way down the aisle as a candle bearer in the opening processional. He was shepherded carefully by a more experienced server, and he performed all of his duties perfectly. In a totally surprise move, we were asked by one of the ushers to bring up the gifts during the Mass, so the whole thing was just one big warm and fuzzy. Henry told me that he loved serving at the Mass and that it made the time fly by. ;-) I'm looking forward to seeing him thrive in this role throughout the year.

On Sunday, while Henry was performing at his matinee, Anne and I made our annual pilgrimage to see "The Nutcracker."

Anne seemed much more into the story this year, and I REALLY enjoyed sharing it with her. We also did a bit of Nutcracker-related shopping, and to the surprise of absolutely no one, spent FAR too much on glittery wooden nutcracker dolls and marzipan Christmas tree ornaments. You only get to do it once a year, right? ;-)

"The Nutcracker" is very special to me. We go every year, and it is a tradition that I savor. It is so festive and cheery. I really hope that, even when they get older, I can drag a child/grandchild to it for the rest of my life. They owe me this. :0

After our busy weekend, the kids happily set their shoes out by the hearth last night, and sure enough, St. Nicholas came for an overnight visit! 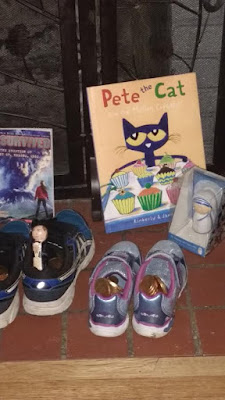 He always leaves chocolate coins, books, and saint dolls. ;-) This year, Anne received St. Teresa of Calcutta, and Henry got St. Dominic Savio. Anne packed up both St. Teresa and Pete the Cat and toted both to school with her to show her teacher.  So precious.

How was YOUR 2nd Sunday of Advent, dear reader? I would love to hear from you. *beams*