Hi all! I am with you today from my snowy home in Western New York. Technically, the library I work at is open (it takes a LOT for schools and businesses around here to close due to the weather). That being said, however, we've gotten about a foot of snow, and the driving conditions at the morning commute were pretty treacherous. So I used a comp day to stay home. Ironic that I took this photo on Friday: 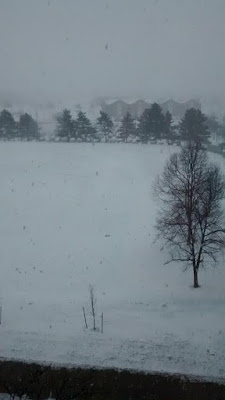 ...and it looks pretty much the same outside right now. :0 The snow is still going strong, which is another reason I didn't want to drive in to work today. It's only going to get worse.

So that's been the story over here for the past several days. We've had an incredibly mild winter here, but February is always dicey, and true to form, we had our first cold spell beginning on Friday. Temperatures hovering around 0 degrees Fahrenheit, and some fresh accumulating snowfall. Dance was even cancelled due to the poor road conditions, which is always a bummer.

And this ties into my Saturday morning Lenten adventures with young Henry. ;-) We woke up all excited for our Mommy/son date to go to breakfast and Adoration.We bundled up and headed out onto the freshly plowed roads. It was a clear and beautifully sunny winter day.

Our first stop was the local IHOP, where Henry and I sampled ridiculously dessert-like pancakes and chose extravagant omelets. I powered up on coffee, Henry on juice, and then we trudged back out into the tundra to drive to the perpetual Adoration chapel. It was just really cold out, no other negative weather conditions.

I was excited to get Henry to this particular Adoration chapel because I tried to take him once before, last Christmas Eve. But when we arrived at the church, we found a sign tacked up saying that the Adoration chapel was closed between Christmas and New Years. Not so perpetual. ;-) But I imagine it's difficult to keep their regular schedule of adorers around the holiday travel season.

So Saturday, Henry and I pull up. We grab our rosaries and devotionals and hop out. I'm explaining to him the logistics and reasoning behind genuflecting (since he's very forgetful in this realm), when we get up to the door, and wham!

I didn't see this one coming. It was indeed very cold, but I was surprised. I imagine, though, that many of their scheduled adorers are elderly, and the cold is very difficult for them to come out in.

Henry and I trudged back to the car, discussing the one other perpetual Adoration chapel in our area, but that one would be more of a drive. Henry had the excellent suggestion of stopping off at his school parish since they have a small chapel that is open during the day. It's not for Adoration specifically, but it would do! And it's quite close to our house. So off we drove.

When we arrived, we found a hearse and assorted other cars in front of the chapel.

BUT, the main church was open, and we know what's in there, right? The tabernacle! So we went in there and prayed for about 15 minutes. All was well with the world. But I STILL want to get Henry to that Adoration chapel! We're going to try again in two weeks, and hope springs eternal that it's actually open.

And with that, I must sign off to attend to my chat reference shift. Yay? No, not exactly, but a librarian's work is never done! And such pleasing ambiance over here at home, with me in front of the desktop, and the kids fighting in the other room as I should "STOP IT!" every few minutes. Such joy. ;-)

I'll be back tomorrow with likely a crafty post. Snowy days cause me to knit a lot. I think I'll be able to post a Lenten book review next Wednesday, check the side bar for details!

I'm off to heat the kettle. How is your Lent going? Does anyone else have a Lenten resolution to go to Adoration? Any other Lenten details you'd like to share? I'd love to hear from you!
Posted by Tiffany at 2:20 PM