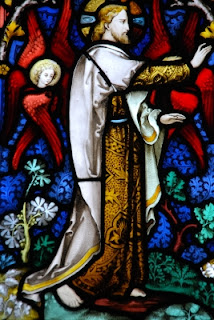 Happy Monday all! It's time for another Vocations Spotlight, this time with Fr. Darryl Millette from the diocese of Saskatoon, Saskatchewan! I met Fr. Darryl at the Catholic New Media Conference, and I encountered more than one person who asked me: "Have you met Fr. Darryl yet, the priest from Saskatchewan? He's just wonderful!" His kind, jovial personality made him a hit at the conference. I immediately began following him on Twitter (@frdarryl, YOU SHOULD FOLLOW HIM TOO!). He hosts a podcast called The SportsFathers that I have become a huge fan of, and he's mentioned my comments on a few episodes! It doesn't take much to make this Catholic Librarian a happy camper.

If you enjoy sports, you should *definitely* check out his podcast! The shows feature enjoyable banter with fellow priests, and you will also hear from his dog, Chloe. The entire situation is absolutely precious. As well, he keeps a blog of audio files from his homilies on his website.

And so, without further ado, here is Part 1 of my talk with Fr. Darryl:

Would you briefly describe your childhood faith background?


I am the oldest in a rather large (and loud) family - four boys and three girls. Growing up, we went to Mass every Sunday and occasionally on weekdays. Prayer in the evening was mandatory, usually involving a rosary (though I seem to remember looking forward to those rare times when the evening was rushed and we had to settle for just a decade!).

As our family moved a number of times, being connected to the local parish was always a vital way for us to be connected to other people.  My home during high school (and the current family home) is on an acreage outside of a small town. It was there that I started to really enjoy taking time for lengthy walks and bike rides, where I’d occasionally wrestle with my understanding of the faith and talk to God. Mind you, I was oftentimes pretty distracted; these thoughts were usually interspersed with my wrestling with the latest deeds of our beloved CFL team, the Saskatchewan Roughriders, or with trying to figure out some algorithm in my computer programming hobby. But faith was definitely a part of my life growing up, in amongst many other things!

When and why did you decide to become a priest? Was it a specific experience, or did it take root over a long period of time?

The thought of being a priest had crossed my mind during high school, but it didn’t really take root in me at that time.  However, when I entered university (electrical engineering) I encountered a Catholic group on campus who is somewhat similar to FOCUS in the United States.  This group, Catholic Christian Outreach (CCO), really challenged me to take this faith in which I had been raised and to make it my own, developing my relationship with Jesus in an intentional way.  They also challenged me to share Christ in different ways. I became involved with this group on an organizational level, helped lead faith studies, and so forth.

During this time, the question of my vocation became louder. However, I also became equally adept at suppressing it. It’s not that I had any sort of big, mystical moments where St. Joseph and Bl. Mother Teresa appeared to me in the clouds and told me to become a priest.  Rather, it was more what I call the gentle, annoying persistence of God, usually taking the form of a slight twinge in my gut when I would hear a vocation talk, or when friends would talk about discernment, or even when I’d see a priest doing something priestly. Usually I’d be able to get that out of my mind relatively quickly… but then a short time later God would annoyingly put some other person or situation in my life to remind me. Over and over. Annoying, gentle persistence. :-)

Finally, when I finished engineering I decided to give a year to work for CCO in their head office as an IT guy.  I wanted to give something back to the ministry that had meant so much to me.

That is a Dangerous Combination (TM).

Partway through that year I couldn’t ignore God’s gentle persistence any more.  I sought the guidance of a priest, who later referred me to the vocations director, who referred me to the bishop, and the following fall I was unpacking at St. Joseph Seminary in Edmonton, Alberta as a seminarian for the Diocese of Saskatoon.

And I was home.

Do you have any suggestions or guidance for those who are currently struggling with vocational discernment?

Fear was probably the key factor that led me to keep pushing God’s call out of my mind, over and over. Persistent questions for me included: How could I be happy without marriage? How could I be happy by being obedient to a bishop? What would it mean if I did all this engineering and didn’t use it as a priest? What would my friends and family think?

I’ve learned a few answers to these questions over the years, and I’m still learning:

- God’s call for your life, whatever it is, will be the most fulfilling thing for you and a source of immense joy.

- I have given up marriage, which is certainly a sacrifice. The young, married parents in my parish have basically given up sleep. I don’t say this to trivialize anything, but rather to point out that sacrifice is required in any vocational following of Jesus Christ. Jesus commanded us to take up our cross daily and follow him. That can be frightening. That can be an immense challenge. It’s easier to turn around. But you are not alone; Jesus is with you. And he’ll lead you right through the cross and into resurrection.

- Obedience can be challenging sometimes, but God’s grace works amazing things through it. Example: Two months after my ordination I was asked to become the main priest chaplain of the largest hospital in the province of Saskatchewan. This was hard. It was very hard for a new, young, somewhat naive priest to take on. The assignment lasted close to a year. But looking back I can see that I learned so much about myself and about ministry during that year. Obedience can be tough, but God is ever faithful. Obedience can also be a source of consolation: there is much need in our world, and it is wonderful to know that I have a shepherd who’s got my back, and who, along with me, discerns where I might be needed most. Obedience is therefore a freeing gift that opens me up to experiences in ministry of which I wouldn’t have dreamed!

- Your background/gifts/talents are important things that God can use in you, no matter what your vocation. Amazingly, I’ve done a good amount of engineering-type work since becoming a priest. My first parish where I was an associate was undergoing a major building campaign and I ended up working on technical specifications. Currently one of my parishes is doing some renovations and I’m in the midst of sound system design. God works in mysterious ways!

- I won’t lie; there was initially some reluctance to my decision to enter the seminary from some of my family and friends. They asked questions, often very good questions about my motives. This was important for keeping me honest with myself. But then, very early on I began to receive a lot of tremendous support from those who had been skeptical. And they all rejoiced with me and my diocese on my ordination day and continue to support me immensely.


As I was reading over Fr. Darryl's words, I was blown away by how much thought he had put into his answers. It reads like an exciting novel, I got so caught up in the story of his family and vocation! In particular, his thoughts on discernment have my mind all awhirl. It's so true - if you seek God's will, you will *not* be disappointed or left adrift!

I hope that you all are looking forward to Part 2 of Fr. Darryl's interview as much as I am! In that post, he'll talk a bit about his ministry, his hobbies, and Pope Francis! Since next Monday is the first Monday of Advent, I have another post planned for that day, so look for Fr. Darryl again next *Tuesday* December 3rd!


*Photo courtesy of artur84, at FreeDigitalPhotos.net
Posted by Tiffany at 1:56 PM