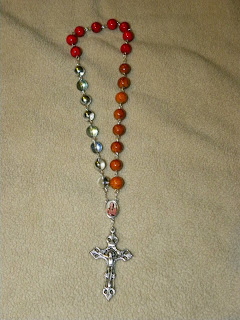 St. Kateri Tekakwitha was patron of this blog for 2012, and is a key instrument in my family's faith story, and so I thought it would be nice to feature the sacramental devoted to her. It's a favorite of mine, and as we near the conclusion of a very emotional week, I could use an opportunity to focus even more on prayer and devotions. I'm planning a fairly detailed action-packed edition of 7 Quick Takes for tomorrow, so stay tuned for the promised anecdotes on adventures in belly dance costuming, and updates on the kids, Halloween preparations (I'm lifting my eyebrows in a frowny fashion at some of the costume catalogs I've seen), my new Nook tablet (oy, it's not going so well :)) and my emotional roller coaster surrounding the long awaited conclusion of Breaking Bad.

But first, let us focus on precious Kateri. Known as the "Lily of the Mohawks" Kateri Tekakwitha grew up in the latter part of the seventeenth century not too far from where I live in upstate New York. Her mother was Algonquin, and a Christian, her father a Mohawk. My dad is Mohawk, and St. Kateri is his confirmation saint (he is a convert). Her family died of smallpox when she was a small child, and the disease also left Kateri with scars and weakened eyesight. When she was 18, she requested to be baptized (I'm certain it was her mother's prayers that yielded this result :)), and received a lot of sass from her tribal community as a result. Catholicism was not looked upon highly by her people because of the heavy handed (and worse) tactics of some missionaries. Kateri eventually left her hometown for Caughnawaga, in modern day Quebec, Canada. She received her First Communion there, and took a vow of perpetual virginity, dedicating her life to Christ. She wanted to form a community of consecrated Iroquois women, but never got the opportunity. She died quite young, in 1680, and is known for the fact that her face cleared of the significant scarring she bore throughout her life as she lay in repose in death. She was beatified by Pope John Paul II in 1980, and canonized in 2012 by Pope Benedict XVI. She is the first indigenous person from North America to be declared a saint.

Before I talk about her chaplet, let me just interject a personal anecdote. Kateri Tekakwitha means a LOT to the Native people who have chosen to become Catholic. I live near a fairly high concentration of people of Iroquois descent, and for a time my family attended a parish (the only one in New York) that is on reservation land. Although the parish wasn't officially named after her, she WAS the community's patron and the congregation prayed for her canonization after every Mass. I think we can all understand that it's important to have someone with a similar background as a role model, and Kateri is that for the Native Catholic people in this area. As you might presume, there is not exactly a high percentage of Catholics amongst the Native population. And Kateri is controversial for many Native people who practice the traditional religion, rather than Christianity. But for those that are devoted to her and share her heritage, she is incredibly special.

I just love her chaplet, which is called the Kateri Indian Rosary. I own the one that is featured at the top of this post. You can see her image on the medal at the center, which is just lovely. So, when asking for the intercession of St. Kateri, you begin with the sign of the cross at the crucifix. There are 24 beads, one for each year of Kateri's life, separated into units of 8. The colors are significant and specific to this chaplet. The crystal clear beads represent water, and on each you pray a Glory Be. The brown are for the earth, and on each you pray an Our Father. These two colors are in tribute to Kateri's Native heritage. The red beads represent blood/love, and on each you pray a Hail Mary. Kateri suffered for and devoted her life to her Catholic faith, so the conclusion with the red beads, symbolizing a martyrdom of sorts, is just perfect.

I love my chaplet. The beads are smooth and heavy and it feels so good in your hand, a perfect reminder for a call to prayer.

St. Kateri, pray for all us that we discern and do God's will always, just as you did.
Posted by Tiffany at 11:47 AM