A good day for St. Therese's charm and prayers...

Ugh. I don't know that today is the day for the humorous post I had planned. I'm going to save that one for a more appropriate occasion, I think. Today is the feast of St. Therese of Lisieux, so why don't we revel in her for a moment? 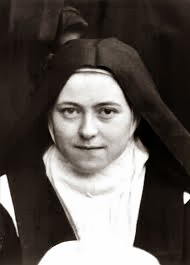 I *love* that we have photographs of St. Therese. She seems so real to me, and seriously, she's so adorable. I know that she was a nun, and that she felt called to the religious life from an age at which most of us were busy flirting with boys and not thinking about even attending Mass let along dedicating our lives to the Lord in such a radical way, but I relate to her very much. I've read her autobiography, The Story of a Soul (although it's been some time and I really need to re-read it, future Catholic Book Club book!) and her writing is so sweet and honest. One can't help but feel drawn to her and her struggles to find her way in her family, in the world, and in her vocation.

I think that her cause really caught fire precisely because of what I mentioned before: her relatability. She's very likeable, and the way that she struggled to find her way in the monastery is something we all understand in whatever vocation we are called to.

I love the anecdote in her memoir in which she discusses this one nun who really gets under her skin. This other nun's habits are so grating to her that Therese uses it as an opportunity to put this "Little Way" into full effect by curbing her reactions in a charitable fashion and offering up her interior annoyance. I mean, we all have these opportunities on a daily basis (and likely, provide them to others as well, ha!). Do we respond as St. Therese did, or do we give in to our baser instincts?

I'm going to dig into Shirt of Flame tonight in honor of St. Therese, and to read about another soul who is inspired by this small nun who died over a hundred years ago. Her legacy certainly lives on.

Magnificat magazine has a feature by Heather King (author of Shirt of Flame) about St. Therese this month, it was quite interesting. Heather talks about meeting a woman who is a member of the Order of Consecrated Virgins, one of the oldest forms of consecrated life in the Church, who she compares to St. Therese. This response to God's call to love in silence and contemplation is something I just can't read enough about, I find it so moving. *Really* quite fascinating. Mike tells me he's glad I decided not to :) but I did consider serving the Lord as a religious sister or consecrated layperson. It's a freeing feeling to not be afraid of such a radical response to God's love, and I have to admit it: I love silence. Having young children means that my house isn't silent, but I do what I can to maintain a domestic monastery. :)

So tonight I plan on my St. Therese reading, and I'm kind of hoping that someone sends me a rose. Any takers? :)
Posted by Tiffany at 2:46 PM