I'm home and I'm still all floaty. I don't even know where to begin really to talk about my trip, except to say that I'm so very, very grateful that I had the opportunity to go, and I recommend it to anybody else who values sharing their faith via new media in the way that I do. AND, it provides a friendly and happy atmosphere in which to meet fellow Catholics. YOU, gentle reader, should go next year. You'll learn a lot, and we can schmooze over wine in the evening, it's a win/win, trust me. Ok, I suppose I should just start from the beginning. 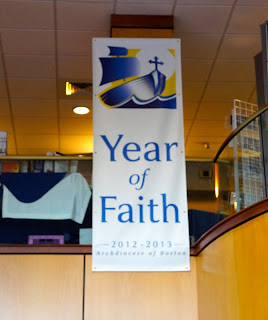 I traveled to Boson early Saturday morning with my sister, Shauna'h. We drove down from Maine, her state of residence, and arrived at the Pastoral Center for the Archdiocese of Boson right before the 8 am opening Mass. We checked in, we fixed our hair, we twittered about, we did all that girl stuff. We felt anxious, since we didn't know anybody else but each other. We filed into the chapel. 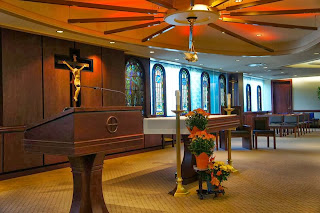 Lovely, yes? A very prayerful environment, just a beautiful Mass. And thereupon we had our first Fr. Roderick sighting. 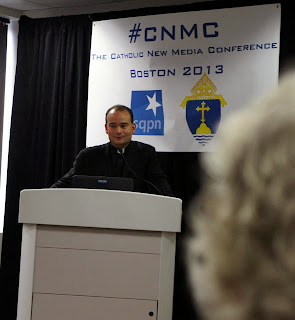 I adore Fr. Roderick. I have listened to his podcast and many others from his Star Quest Production Network for years. I am just a huge fan of his down-to-earth, jovial style. And now I would finally get to meet him in person, after listening to his show and feeling a part of his life and ministry for years. It was enough to make a Catholic girl very, very happy. Shauna'h (a fellow Fr. Roderick fan) and I plotted how we would corner him and make him pose for a photograph with us, but we'll get back to that in a moment. :)

First, we had the keynote speaker for the conference, who was Monsignor Paul Tighe, secretary of the Pontifical Council for Social Communications. 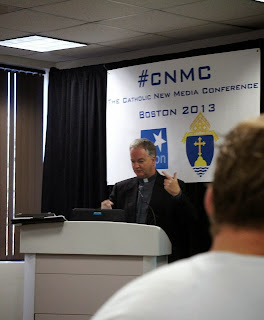 He was *excellent* and a recording of his presentation is up on the SQPN site right now. He was articulate and engaging (and an Irish accent always helps, let me tell you) and his insider view of Pope Francis's social media presence was just riveting. An AWESOME way to start off the conference.

Next, I attended a blogging session while Shauna'h went to a talk on Pope Francis. And can I tell you, I *loved* live Tweeting. It was such a novelty to me to be able to pull out my tablet and Tweet to my little heart's content all while that not being considered rude. 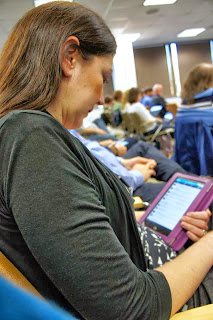 I was in heaven. And the blogging session was great. We talked about some tips for increasing your readership and how *relationship* between blog writer and blog reader is so key. I happily took notes and live Tweeted important tidbits the entire time. After that, Shauna'h and I together attended a retreat-like presentation on the role of Mary, Star of the New Evangelization, in our lives and ministries.

Pretty soon it was time for lunch. By this point, I had a happy buzz going from everything that I was learning, but Shauna'h and I hadn't really met anyone yet because we were being #introverts. This is a genetic condition, apparently. But I didn't really know how to break the ice on this one. I was feeling like I wanted to be more social, and my live Tweeting garnered me some new happy Twitter followers, but I needed to actually talk to people face-to-face. That's a lot harder. :0

We ate our sandwiches and wandered out into the hallway. We stumbled happily upon some book giveaways and other opportunities to purchase: 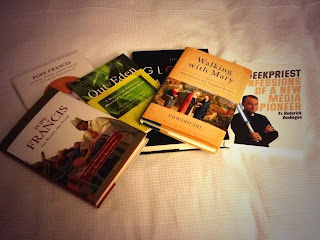 And here's where things get *really* fun. As we formed a little gaggle out in the hallway, Fr. Roderick crossed our path on his way to sign copies of his book, Geekpriest. I have already read his (excellent, and funny) book as a reviewer, but I wanted an official personalized copy, so Shauna'h and I were hovering near the book signing table. We overheard Father saying that he was hoping to find someone to take a photo of him with a friend holding light sabers, since that is the pose he is striking on the cover of his book. We pounced.

Next thing you knew, Shauna'h was using Fr. Roderick's iPhone to snap photos of him, and then it was pretty easy to segue into this: 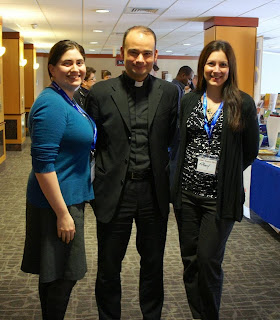 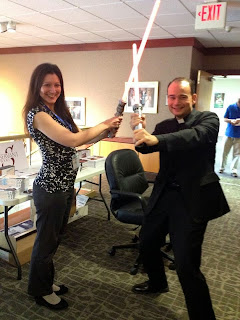 As Shauna'h and I stood nearby waiting for Father to sign our books, I remarked that we are pretty much Fr. Roderick groupies. And we weren't alone. A little line formed to snake around the table, awaiting Fr. Roderick autographs. Meanwhile, Father was unassumedly crafting personalized missives to write into each book, and when someone gently tapped his shoulder to let him know that the line had lengthened, he nearly jumped out of his chair in shock. Could the man get more precious? I mean, I didn't really think it was possible for him to be even more charming in person than he is on his podcast. I was, however, quite wrong.

I was just elated. I came down from Cloud Nine long enough to attend a session on using new media to converse with inactive Catholics, and a moderated panel discussion. All too soon, we were attending the final prayer service and Eucharistic Adoration, and then heading to our hotel. I felt jam packed with useful new information, and inspired to put it into practice. But I still wanted to socialize.

We had met Fr. Roderick, a real coup, but I really wanted to come out of my shell and meet some other new people as well. Shauna'h and I decided to dine down in the hotel bar to see if we ran into anybody from the conference.


We did. We met a bunch of people from the Catholic Weekend podcast, Maria Johnson, Billy Newton and Sarah Vabulas. All super nice. They all remembered me from Twitter.

The Catholic Librarian was very, very happy about this, I assure you. Afterwards, Shauna'h and I went over to the official Tweetup, which was at a Dave & Buster's.

The location was described to me as a "Chuck E. Cheese for grown ups" which I have to say is not only an unflattering description, it is an accurate one. Very difficult to converse there, since it is so loud, and not a lot of space to gather given the set up. At first, Shauna'h and I sat at the bar and had a drink, hoping for things to clear out a bit so that we could do a social approach of the SQPN Tweetup crowd. No easy feat, let me tell you. There just wasn't a lot of room to move. Eventually, we finished our drinks and moved over to say goodbye to everyone. They were all quite gracious, and we got to speak to Fr. Roderick for another minute or so. Then we bumped into Jeff Nielsen, the host of Catholic Weekend, and ended up chatting with him for about 15 minutes. A very kind and funny person, he rather made our night. We went back to the hotel feeling very happy that we had extended our introverted selves and introduced ourselves to some wonderful people.

The next morning, Shauna'h and I attended Mass before heading back to Maine. It all went by so fast, I'm terribly sad that it's already over. I am, however, SO glad that I went, and I plan to attend again so that I can learn more and keep up with some of the connections that I made. They were live streaming Catholic Weekend while we were there, and were looking for conference attendees to join in. Jeff assures me that next year he wants me to come over and be on. :0 There is nothing I hate more than hearing my own voice, but I suppose stranger things have happened.

So now I'm trying (somewhat unsuccessfully, I forgot at least 3 things this morning) to get back into my regular routine after such a special weekend. I feel very blessed and inspired. I will keep you all posted when plans for CNMC 2014 are announced, and I'm serious, I WANT YOU ALL TO GO.