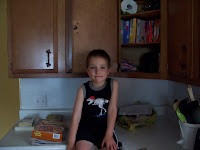 My little boy is getting so big, isn't he? Precious dumpling. He looks more and more like a big boy everyday, and not a toddler anymore. He still has stupendously kissable cheeks, but his chubby belly is no more; he can wear jeans now! As a baby and toddler, we never put jeans on him because he was just too, well big, for them to be comfortable on him :) He's a darling.

I'm feeling a bit better on the school issue; I ordered his school supplies kit yesterday, so he's pretty much set for the public elementary school in September. Let me complain about the school supplies kit for a moment - $56! Granted, you could purchase the items on your own, but I don't think it would ultimately be any cheaper and it would certainly be more of a hassle. The school gives you this list of, I swear it, a *hundred* different items that you have to send your child to school with. 2 boxes of this specific type of crayons, an art smock, 3 glue sticks, 1 box of colored pencils, this specific type of construction paper... the list goes on and on. Mike and I agreed that just ordering the kit through them would be infinitely less of a near occasion of sin than going to the craft store and laboring to find all of this stuff. Once again, school was not like this when I went to school. *feels old*

At any rate, this will be a learning year for all of us. I'm definitely open to Catholic school should we not feel that the public school is a good fit. I need to gather a lot of information though, about both the public school *and* the Catholic schools, so it will be good for me. And of course, both Mike and I need to be on board for a decision to pay for Catholic school, and with him still being in school full-time next year, he's just not comfortable with the financial commitment at this time. Especially given that our public elementary school is considered the jewel of the district. I'll just pray that if Catholic school is the route we ultimately discern is best, we will both come to that conclusion and agree to pursue it. I'm sure there will be more to come on that.

At any rate, our Henry is such a precious soul. We just want what is best for him. He took this picture of me knitting a few weeks ago: 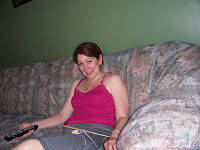 Ok, onto the bird story. Last weekend, I noticed this odd looking bird in our backyard. Now, we're diligent about keeping food in our feeder, because, well, we love birds. However, we see very few interesting birds back there. We live in what I call an "urban suburb," just over the city border. Occasionally we get some Blue Jays and some Downy Woodpeckers. We do have a Northern Cardinal family that are regular visitors, and we've had a single American Goldfinch. We do get Dark-Eyed Juncos in the winter, which are pretty much our crown jewels. Ok, anyway, we usually just get House Sparrows, Common Grackles, American Robin, European Starlings, and an occasional Black-Capped Chickadee.

So, the odd-looking bird. Brown all over, kind of rumpled looking. Sort of bland. I couldn't really place him. But what struck me is that it appeared that he couldn't fly. He was just standing really funny. This was confirmed with about 5 minutes of constant surveillance when I saw him try to fly and fail. Immediately, I started to worry. An injured bird will pretty much quickly get gobbled up by any number of predators. Hawks, other large birds, cats... the list goes on. There was really nothing I could do for him, so I just kept rooting that his issue would resolve and he'd be able to take flight.

That evening, he was still out there, struggling :( And I noticed a large Common Grackle eyeing him from the bird feeder. My nurturing instinct went into overdrive, and as I watched, the Grackle went over, and to my horror, tried to pick the injured bird up with its claws. I pictured the Grackle cackling as it carried the injured bird away, to be ravaged. I shrieked and ran downstairs. By time I got down there, the Grackle had backed off, since the injured bird was making quite a racket squawking up a storm. All evening long I kept vigil, and I felt just awful. This poor little bird! He may not be particularly attractive or exotic, but I wanted him to make it. He took up refuge near the garage and the bird feeder. Suddenly, a group of Grackles flew down. My hackles went up. One of the Grackles picked up some seed in its mouth and approached the injured bird. Immediately, injured bird squawked as if someone were threatening it with a hack saw. As I watched in alarm, the Grackle went over and... popped the seed in its mouth.

OOhhhh... This Grackle was the bird's MOTHER. This was a juvenile Common Grackle! It must have fallen from the nest early, and poor Mommy Grackle was having the equivalent of a bird heart attack trying to either get the baby back in the nest or comfortably nourished and protected down on the ground. The baby chewed up the seed, and Mommy Grackle chased away the other birds that had come to feed on the seed. Suddenly, I regarded the adult Grackle with affection. I related to her as a mother :)

After the sun set, I didn't see the baby again. I'm hoping that he was able to stick it out until his feathers developed enough for him to fly, or the mother managed to get him back in the nest. That's the version of the story I choose to believe, anyway. Poor little thing.

Anyway, I'm off tomorrow to accompany Hank's pre-k class to a local amusement park, and Monday I'm taking off because my in-laws will be in town. So, you'll hear from me again Tuesday. Have a blessed weekend!
Posted by Tiffany at 10:02 AM