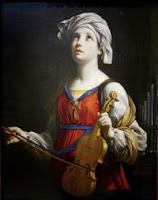 Her feast day actually isn't until November 22nd, I just realized that I misread my calendar :) But still! Her feast is approaching, so I thought she'd make a nice blog topic. St. Cecilia is my own patron saint, the name I took on at confirmation. She is the patron saint of musicians, and lived in the early, persecuted years of the church. Impressively, she is one of only seven women (excluding Mary, mother of Jesus) mentioned in the canon of the mass during the eucharistic prayer. She was fairly young when she died, though her exact age is unknown. She desired to live a single, religious life, but was coerced into marriage. Her husband belittled her faith, but was eventually won over to Christianity by her example. Her husband's own brother was also baptised, and they developed a ministry giving proper burials to martyred Christians. Eventually, as always seems to be the case in these sad stories, both men were martyred for their activities. Cecilia too was arrested, and when she refused to revoke her faith, she was also martyred. When her tomb was examined centuries later (*yuck*! but that's what they always do with saints) her body was found to be incorrupt. That's a Catholic thing you hear about a lot. Quite intriguing.

Ok so, there's a lot going on here. I think it's a touching story, to be sure. I like her powerful example in difficult times, and the fact that she was just a regular girl. Many female saints were nuns. Also outstanding examples, but since it's a different vocation than what I'm called to, I don't relate as much. That's why I picked her.

Obviously, martyrdom is not funny, but I have to be honest and say that sometimes I find a bit of humor in these saint stories. Especially the ones that are much older, so perhaps some details have been embellished over the centuries. The saint never is simply killed. They are bundled into sharp wire, kicked around, tossed into boiling water, run through the streets while people throw stones at them, and finally, chopped into bits. They had hard, hard lives and deaths, these saints. So, for St. Cecilia, I find this on the Patron Saints Index:

"suffocated for a while, and then when that didn't kill her, she was beheaded."

Wikipedia has it this way:

"At that time, the officials attempted to kill her by locking her in an overheated sweat-house (bathhouse). However, the attempt failed, and she was to be beheaded. The executioner attempted to decapitate her three times unsuccessfully, at which time he fled. Cecilia survived another three days before succumbing. "

Poor thing not only has a hard life, but a sucky death. Relatedly, I have a book on patron saint names for the purpose of naming your child. Mike knows the rules: any child of ours has to have a saint name. Henry has two, Henry and David. This is good. For many entries, a long listing of their patronages is given. Saints are assigned to be patrons of a specific group, entity, or affliction by virtue of having had some exposure or experience to it. Mike and I were literally howling with laughter when we read one entry, which included lots of random things, such as being the patron of lace makers, ship builders and house painters, and also stated that this unfortunate soul was the patron of those " being pursued and attacked by wolves."This guy really drew the short straw in life.

But on a more serious note, I think a lot about the martyrdom of early Christians because our situation is so much different than theirs. Certainly, people are still martyred in the traditional sense, especially in other areas of the world. But in our country? You're much more likely to be ridiculed for simply *having* religious beliefs and going to church. You're looked upon as needing an "emotional crutch" or just not being very intelligent if you hold genuine religious faith. Pope John Paul II addressed this once in a speech near the end of his life, perhaps it was World Youth Day 2002, in Toronto. He called it "white martyrdom." We are all called to be white, rather than red, martyrs for our faith in these times. I think about that all the time. There are many things about me that suggest that I am traditionally religious: the jewelery I wear, the things I put in my office, the rosary beads in my car, etc. And even those small things open us up to public criticism when you least expect it. I still think it's easier for us than it was for St. Cecilia, no doubt about that. But I like to think about modern spins on age-old religious issues, and how they still apply to us, here and now.
Posted by Tiffany at 11:10 AM