Well, look at me go, two Crafty Tuesday posts in a row. I go in fits and spurts though, kwim? Whatever is bouncing around in my little head at any given point in time is what I write about here on this blog. Right now, that's crafty stuff. And so here we are!

Based upon my holiday crafting post from last Tuesday, I set up my Ravelry gallery with all the projects queued up, plus other fall/winter knits that I'd like to get to.

YEAH, there are a lot of projects in the queue. Plus I added a few more (my sister asked for a shawl for Christmas, I mean, all for love!). As I took stock of this wall of to-be-completed projects, I decided that I'd try to finish a few things quickly, to give me confidence. So that my spirit would not falter. ;-)

Thus, this weekend I worked quite a bit on my Abbey Pullover. I'm on the yoke, this girl is nearly finished. The yoke is lace, so it's slower going, but it's going. The precious little churches in the cloister lace are nearly all formed! 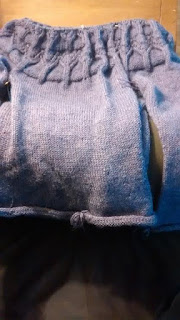 Smoke was nearly coming from my needles this weekend, I was working so studiously. Then I ran out of yarn.

Don't panic! ;-) I have another skein, I just didn't have it with me, whew! It's in my, ah hem, *work stash*. That would be the drawer in my office filing cabinet that is filled with yarn rather than papers. Why are you looking at me like that, doesn't everybody do this?!

ANYWAY, I had to pause until I could grab that last skein of yarn, but I'm near the top of the lace chart. A gold star goes on my assignment sheet.

So then I took a look at the projects in my queue. If I can whip a few small ones out quickly, that will decrease my incomplete number quickly (which is now hovering around 20, eeks!) and soothe me a bit. So I decided to crochet the baby bird Anne has been asking for.

I love crocheting animals, very enjoyable and cute. I don't love *knitting* animals as much. There are parlor cats who will not be named that are a direct result of this situation. But crochet is all good. So I found a free pattern from one of my favorite designers, Teri Crews, and set to work yesterday.

I was finished in under two hours. Teri's bird is blue, but Anne wanted a red bird. And this is the result: 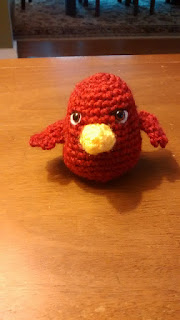 So, YEAH. He's cute, right? BUT decidedly more Angry Birds than I was going for. When I gave him to Anne, who has never seen an Angry Bird a day in her life, she took him, kissed his beak, named him Bugaboo, and then examined her new baby very carefully:

"No, he's happy! He's just worried about things. It isn't easy being a bird. He has to worry about flying south come fall."

She seemed to accept this explanation and worked diligently to introduce him to her other animals so that he would feel included. ;-)

Later Sunday evening, I was sitting beside Mike casting on for a new hat while we watched TV. I was getting gauge but not real happy with the fabric, and contemplating dropping down a needle size, when he asked me about sock yarn in fall colors.

Hark! My darling is asking not only about yarn, but sock yarn that is not plain black or navy blue?

"Yeah, just for around the house. Kind of like retro 70's colors? That would be kind of fun. Do you have any yarn like that?"

He asks me about sock yarn and then says I don't have to actually do anything about it? Silly man!

I will conquer this particular self-striping quest, I know I will. I have found a few contenders and have a consult scheduled with Mike for tonight. ;-) The only problem is...

...this adds one more project to my queue.

What are you working on this week, friends? Trying to finish some projects up before starting your holiday crafting for the year? Do tell me all about it in the comments. *beams*
Posted by Tiffany at 10:14 AM