Bright & sparkly things - because louder is *always* better in my world...

...aside from actual noise, THAT I don't enjoy so much. :) And unfortunately, Anne's volume seems permanently set to "Deafening" by some nefarious hand these days. I took her shopping with me last night to get some linens for her new bed and her high-pitched little voice just positively RANG throughout the store. Of course, it didn't help that I took her to Mrs. Fields prior to this, hence she was on a total sugar high, so I suppose this was all my fault on this particular occasion. Alas. She's cute, I love to spoil her. We even thoughtfully packaged up one of the sugar bombs to go and bring home to Henry so that he could experience the joy later on, right before bed. Mother of the Year, right over here.

But I digress. :) After we got home and got Anne settled, I popped open my knitting basket to grab something to work on while Mike, Henry and I finished watching an episode of "Columbo." There's a station here that airs them every Sunday night, and it's become quite a lovely tradition. If we watch them with Henry, we often DVR them and watch in two parts so that he doesn't have to stay up too late. Plus, Henry asks a LOT of questions when you watch things with him, so this slows down the process quite a bit:

"Why is he doing that, Mommy? Is he the murderer? But what about that other guy? Does Columbo know it's him? I mean, he doesn't seem to really know anything. But I like his dog. Is that a clue? What's that he said?"

So, "Columbo." Knitting basket. Right! These days, my knitting basket has started to also include some sewing. The dancing thing seems to be the reason for this mostly, although I also now knit more cardigans and thus have to sew buttons onto them.  Apparently, my new button sewing abilities have given me a drunken sense of power, because all of a sudden I'm shearing fabric off of dance costumes and looking to sew new things in. Sounds very dangerous, no? ;-)

I have one gold costume that was not made correctly, and the results have made me nervous ever since. The darn thing was so *heavy*, and when you dance, you know...you don't want gravity choosing to creep into your life and teach you a lesson right at that exact moment, know what I'm sayin'? And it just never fit me correctly. So I cut the heavy fabric off of the belt, which I never liked anyway. Let me tell you, taking scissors to fabric that you truly despise is the most freeing feeling in the world. I ordered a new skirt, which is guaranteed to actually fit me in hip and length measurements since it's custom cut. So once that arrives I can wear the newly freed belt over top of the new skirt. Shazzam! But the belt was also problematic. It had gold beaded fringe hanging from it, very pretty, but the fringe was missing in spots. Ugh. I made it my mission to patch in new fringe.

Heretofore began an obsessive Etsy search for gold beaded fringe, my very favorite type of reference work. I found a lovely beaded fringe vendor on Etsy, Odyssey Cache, who was wonderfully responsive when I wrote to her to ask if in her opinion the beading could withstand "a LOT of fast and swishy movement." She responded quickly with:

"Are you a belly dancer?"

I had to snort at that one. :0 Apparently a number a belly dancers contact her about her beaded fringe. She was wonderful, but in the end, I decided to just order some metallic fabric fringe, so that I didn't have to worry about losing beads, which I found at Mary Not Martha on Etsy: 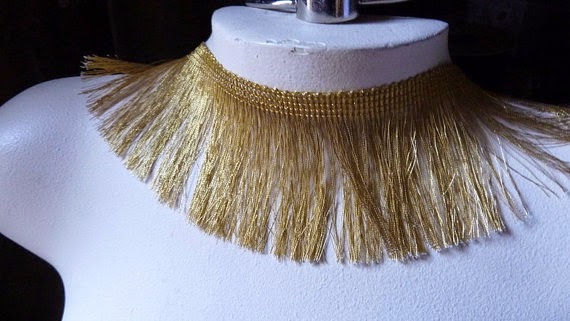 It's not as long as the other fringe on my belt, but it'll do just fine. At least now there aren't bald spots in the fringe. I sewed it in last night, and I'm feeling mighty proud of myself and my new amateur sewing ways. I meant to take a photo of the belt, but as we are all so painfully aware these days, I *forgot*. I promise to include a photo in 7 Quick Takes this Friday.

That finished, I pulled out another in-progress item in my basket, which is a colorful pair of socks for Henry that he requested for Christmas. Henry, always a soul dear to my heart, likes very bright and bold colors. And, precious child that he is, he always wears the socks that I knit for him and proclaims them his very favorites.

Thus, he is knitworthy. I went right out and bought the loudest sock yarn available by law: 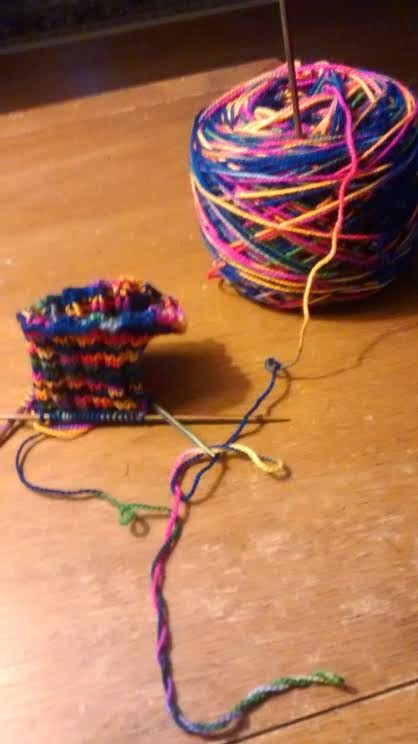 This is Frolicking Feet sock yarn (divine) in a colorway called "Confetti." I think that he will love it. :0 Working on the cuff of sock #1, we're getting there!

Hope that you are all having a wonderful Tuesday. :) What's new with you?! Leave me a comment!
Posted by Tiffany at 12:55 PM