Little girls who unfasten their diapers in the night...

Precious Anne. :) Who *is* in fact potty trained, but can't go through the night yet, and we're fine with that. She was in need of some new summer sleepwear, and so I made a pilgrimmage to Carter's on my way home from work Monday. Well.

I hate this seasonal clothing problem that we all must suffer through. As in how all the summer stuff is being eliminated long before the 4th of July. The climate here is so different from season to season that it's not helpful to need a new winter jacket in January, to find bikinis and short skirts already out in the stores, know what I mean? And this is what I encountered in Carter's. Short sleeved nightgowns already on clearance with stock looking like nightgown-clad locusts had just breezed through the store. I mean, clearance prices are great, but finding what you're looking for in your size is now a problem.

I come home with 4 nightgowns, plus a 3 piece short/pant/top set bearing flamingos. Because...who can resist flamingos? They were even pink and orange! But I digress. One of the nightgowns is the style I was looking for. You know, a nightgown, it's not that complicated. The others were, well, like this: 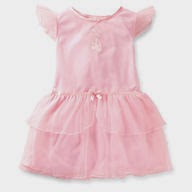 Mike took one look and arched a dubious eyebrow:

"Are you sure that's a nightgown? It looks like a dress."

Female clothing styles may often confound my husband, but on this one, he is right.

"I'm sure. It's part of their princess line of sleepwear."

I mean, it's adorable, don't get me wrong. Come night time, I asked Anne which gown she wanted to wear, and she picked one of the princess offerings. I put it on, and she floated down the stairs like a fairytale queen. However, 2 nanoseconds later...

I look over to find Anne, her arms extended out in second position, looking miserable.

She fingers the frilly tulle at the sleeves. I tried to convince her that it didn't actually hurt, but she wasn't buying it. She didn't want to take the gown off, mind you, but the princess life isn't as cushy as we all think, apparently. I put the others immediately into the wash, hoping to soften them up before wear. Meanwhile, the next morning:

And this is what I was worried about with nightgowns. Easy diaper access = potential crib sewage situation. *second sigh*

Last night, I convinced her to wear the more traditional nightgown, and I could tell that she liked it and that it fit comfortably. I was still worried about the diaper situation, but praying for improvement.

I get up and head into Anne's room. She's standing up. That is a good sign 0% of the time.

Shocker. Her diaper was fine, something had just spooked her. I rocked her and got her some water, then she went contentedly back into her crib.

So maybe the diaper situation won't actually become a crisis situation. The nightgowns are coming out of the wash tonight, so here's hoping for some softening. And some more selection next year, when we have to shop for summer nightgowns in February.