This Catholic parenting thing doesn't get any easier...

Happy mid-January, everybody! How is the winter treating you so far?

Things are great over here. We're still in winter term at the university for which I work, so the campus is blissfully quiet and peaceful. Classes don't begin again until January 28th, and I don't start teaching my library lab again until 2 weeks after *that*, owing to the drop/add period.

This quiet winter Ordinary Time has had other benefits. January tends to be a performance lull for dancing, which is fine with me. One needs time to recharge and hone their craft, and I have a bunch of classes and workshops coming up. In faith stuff, I've been thinking a lot about the kids. For the first time, I have a teenager in my house, and I'm finding it a new challenge to think of ways to continue to share the faith with him aside from weekly Mass attendance. I touch upon sharing my faith with my maturing brood of youngsters, as well as this general post-Epiphany winter theme, in my piece over at CatholicMom.com for January: 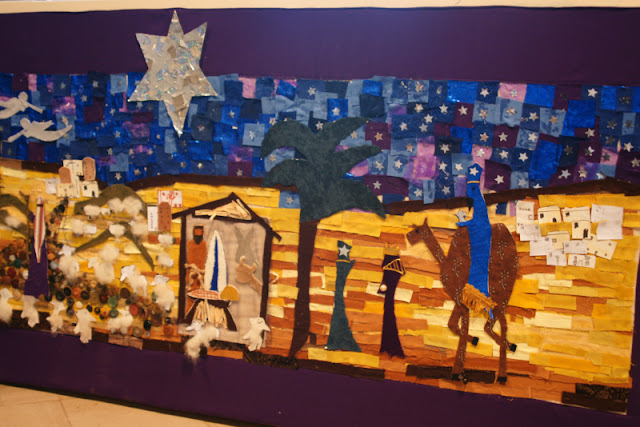 This time of year definitely lends itself to contemplation for me. Ironically, it's *after* Advent, and yet still before Lent, but there you have it. This year, a big impetus is Henry's 8th grade retreat.

Somehow, my first baby is going to high school next year. 😭 And he'll also be leaving the school that he has attended for 8 years, and has shared with Anne for the past 3. I'm pretty emotional about the whole thing, as you can imagine. The 8th graders have a special retreat just prior to Catholic Schools week in late January, and just prior to when the Catholic high schools mail out their acceptance letters and financial aid packages. Parents were invited to write letters to their kids that they would read, privately, during the retreat. I wrote mine yesterday. Well.

Let's just say that I cried. A lot. There was so much that I wanted to say, but I also didn't want to overwhelm my 13 year old with the emotional baggage of a woman in her 40's. So it wasn't easy. But I wanted him to know how proud we are of him, how much we love him. How he reminds me so much of myself, and that it's more than OK to be introverted and reserved - he will only continue to blossom into the kind, sweet and empathetic young man that God has so clearly created him to be. How the most important things in life aren't grades or what high school or college you attend, but discerning and making good choices, seeking God's will, helping others, nourishing healthy relationships, and making an impact with the causes and people that you love.

It was a heavy task, both emotionally and spiritually. But one that I am privileged to have. Henry, in particular, challenges me to be a better person because he is my first and oldest child. Inevitably, when something new comes up with regard to his life and development, I have no idea what I'm doing. 😂I feel like I'm winging it a lot. And that's one thing with dance, and quite another when it's your kid, a precious, eternal soul given into your protective care!

This whole parenting thing is a journey, an adventure, and as my mom always said (and aren't moms ALWAYS right about these sorts of things?): "babies don't come with instruction manuals." You just have to figure it out as you go along, and you're going to make mistakes along the way.

This year for Lent, I want to single him out for some more mature spiritual time with me. Exactly what this will entail, I do not know. I will wing it. :0 But I'll figure something out!

Any words of wisdom to share for Adventures in Catholic Parenting? I'd love to hear them!
Posted by Tiffany at 9:16 AM