A continued Happy New Year to you all! 🤗I'm really riding this New Year's wave to it's maximum, so just know this going forward. ;-) I miss the lovely visiting time of the holidays, but I'm really treasuring the freshness of January this year.

I promised last week a synopsis of my always entertaining New Year's Eve performance exploits, and I always keep my promises. You have your beverage with you to sip? 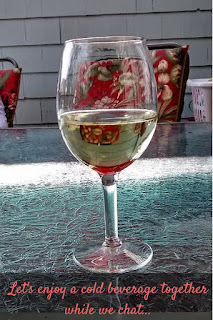 Rather than the sub-arctic temperatures of last Near Year's Eve, this year the temperatures were mild, and thus the chosen precipitation of the day was pouring rain. And it being the very beginning of the winter, it was pitch black outside when Claire arrived to fetch me, my big rolling suitcase and my sword at 5:30 pm. We hustled down to the restaurant, managed city parking like champs, and wrangled our wet stuff inside. It was about 6 pm.

The restaurant owner and staff were very gracious and happy to see us. They escorted us to our dressing room, otherwise known as the supply room. ;-) To be sure, we are very grateful to have a place other than the public restroom in which to change, so no complaints here. But it's always a comical game of Twister with 2 of us and our poufy costumes smashed into a small space, also occupied by various and sundry restaurant supplies: stacks of tablecloths, cases of takeout containers, and various candles. We wedged in there, and as we began to change, I quickly lost track of a shoe. I decided not to worry about that until we had to leave, and stashed Sword atop an open box of sugar packets.

Once changed and in our coverups, we scouted the Music Situation. No matter what, the music is always a Situation in these encounters. :0 They had a sound system, but it was up at the front of the restaurant behind the greeting/checkout counter, the opposite end of the building from our home base. We quickly conferred about aux cables and using each other's devices, and hurried back to our safe space. It wasn't yet 6:30, and they had wanted us to wait, but suddenly an employee appeared with the request that people were asking for us, and could we begin RIGHT THEN?

Claire hurried to the front to start my music, and I concentrated on sweating profusely and straining my ears to hear the music switch over to my entrance piece. I heard the first strains of the overture, thankfully, and burst out from the back room with my veil aloft. Well.

My music supports a grand and beautiful veil entrance, and let's just say that a crowded, small space does not support a grand veil entrance. :0 I had never danced at this restaurant before, but I've danced in restaurants with small eating areas. I've always been able to enter with a veil and find a spot at the front where you can do some veil work before discarding it. This restaurant is set up differently, and the 2 more open areas leading into the 2 seating spaces were crowded with servers moving back and forth with food and drinks, and with people waiting to be seated or to gather food from the buffet.

I swirled out and immediately was swallowed up into a sea of humanity. There was no room to do anything with the veil, or even lower it very easily. Every time I turned around, there was a server backing away from me carefully, balancing a tray of water glasses. I got up to where Claire was holding vigil with the music, and unceremoniously discarded Veil in her general direction. Things got a wee bit easier after that, but I have to say that this was the tightest space I've ever dealt with in restaurant dancing. The place was hopping, and the New Year's Eve menu was only buffet. So there were people up and about constantly, not just the servers. Me moving from place to place caused a ripple effect of gentle scattering of other bodies. The section with the buffet in it was almost completely inaccessible, and I had to give up trying to shimmy between tables over there and only dance at the small entrance spots. Even there, I risked accidentally slapping servers left and right.

In a nutshell, Set 1 featured:


When my drum solo finished up, I was relieved to have that set behind me and swirled to the dressing room. Claire and I conferred, and she confessed nervousness about the giant fan veils she planned for her set. 😬 The owner asked her to wait to start her set, because he was hoping some of the tables would clear out and turn over to new guests. So we waited. And waited. And eventually he came back to say that nobody was leaving. 😂 We took that as a sign that everybody loved us and wanted to see more dancing. 😇

Eventually, he asked Claire to start, and I hustled over in my coverup to set up her music behind the host counter. Immediately, people began asking me about their reservations and how long the wait was. I suppose hostesses in Indian restaurants often wear hot pink dance coverups? ;-)

I got Claire's music going, and the place was now even MORE crowded than it was for my set. People were up trying to pay their bill as new people were coming in and waiting. Her music was doing the glitchy thing too, and I kept trying to assure that the aux cable was attached as firmly as it could be.

After she finished, we changed for our second, and final, sets. We waited again for the tables to fully turn over at the owner's request. Our dressing room, formerly quite toasty warm with all of our necessary shenanigans to get into full costume, and then coming back sweaty from performing, had grown a tad chilly, and cold sweat was now my constant companion. I had decided not to enter with Veil this time, but Sword is featured in song 2 of the second set. He always brings a measure of anxiety in his wake. ;-)

The request for us to start anew came quickly again, and as Claire moved to the front to start my music, I readied and assured my costume was all smoothed. I heard my entrance overture, and got ready to burst out, only then noticing that I had an empty straw wrapper stuck to my bare foot. Glamour, glamour ALL THE TIME.

I danced out, and this time the restaurant was at a much more normal capacity, rather than bursting at the seams, which was a welcome relief. It was still tight over by the buffet, but not as claustrophobic as before. And the audience, because they were seated and eating for the most part, rather than standing in line, were very engaged and responsive. As well, Sword had his big moment, which is always a crowd pleaser.


It was great, I really enjoyed that set. Claire was able to start her second set soon after mine ended, and we both breathed a sigh of relief that all went well. The owner was very happy and wants to have us back next year. A win/win.

As I packed Sword up and looked for my shoe, spilling the sugar packets all through the open wire shelving unit, :0 I reflected on how much I enjoy my eclectic set of interests. Egyptian dance is much more to me than a hobby, truth be told - it's my passion, it's my (granted, secondary) profession, it is the creative inspiration for everything else that I do, and it gives me a significant sense of creative purpose and meaning. The dancing life is good, truly it is.

I'm signed up for two Egyptian folkloric dance workshops this winter, as well as a Turkish dance intensive in March. Turkish - I'm branching out. ;-) I am very blessed to be able to do what I love. This New Year is going to be a good one, I just feel it. 🤗 In terms of dancing, I want to work on studying and learning as much as I can, and challenging myself in new ways.

How is your January shaping up? Any New Year's resolutions that you're working on? I'd love to hear about them in the comments!
Posted by Tiffany at 9:07 AM