Anecdote of the day: Anne greets me first thing this morning outside our bedroom door, wearing her nightgown, tossled hair, and a frown:

"Mom. You have to come quick."

She hustles me down to her little bedroom, where she has clearly *just* stepped out of bed, and points an accusing finger at a shelf:

"How did Peppers get up there?!"

Peppers is her new stuffed animal friend, a parrot. I actually have no idea how Peppers got up onto a shelf, as I tucked them into bed together last night, and that does seem a little scary, doesn't it? Did he fly up there?!

"Daddy probably put Peppers up there when he checked on you last night, Honey. Maybe he had fallen out of the bed."

"But why would he put Peppers up there and not back into bed with me?!"

In other news, we're in full on back-to-school prep over here. Although we're still getting flare ups of humidity around these parts, September is in the air. We're getting occasional cool nights, and the campus where I work is beginning to look different. Students are arriving for orientation, and there is a bustling sensation in the air. Classes start for them on Monday. I don't start teaching until week 3 due to the way our library lab is structured, so I still have some time to breathe, thankfully. My kids don't start school until the Wednesday following Labor Day.

It's kind of a big year for my Henry, because he's going into 8th grade. That's the highest level in his and Anne's Catholic school, and the whole thing is a bit emotional for me.

I'm struggling with/panicking about this quite a bit. Next year, he will start high school, and it does NOT seem like this is possible. I know, I know, I've whined about this before. :0 But I can't help it. This is big. I never pictured myself as old enough to have a child in high school, and here we are on the very precipice of that. I'll make it, but it isn't easy. At least I have Mike to share the journey with me. *heart*

As we move into the fall, Henry is facing the Catholic High School Entrance Exam. We don't know for certain that he will attend Catholic high school (i.e. whether we can afford it), but his top choice is the Catholic boys high school that is minutes away from our house. Assuming that the financial aid package is manageable, we'd love to send him there. But it's a big "if," to be sure.

Accordingly, given that the entrance exam is in early November, and sometime thereafter we would find out the financial information, Henry and I are going to pray a novena starting Sunday (August 26th) using this novena to St. Kateri. 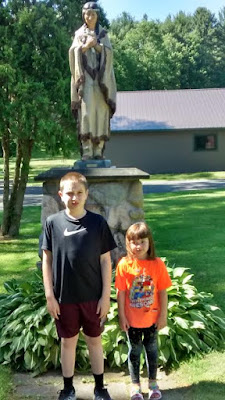 Would anybody like to join us? This would mean that the last day of the novena would be Labor Day here in the U.S., and since my kids start school right after that, the timing seems apt. :) I asked Henry which saint he would like to ask to intercede for him, and he chose St. Kateri, isn't he precious? If you'll be joining us, let me know!

All right, I have a bunch of beginning-of-semester emails to send out, so I'd better get on that.

How is your back-to-school season going? I'd love to hear from you in the comments!
Posted by Tiffany at 11:02 AM