Hello all! I had time for a short dance post, and I promised last week that I'd get an update in prior to our last Summer Book Club installment.

And so here I am, reporting in for duty. On the whole, it went very well! We danced on both Saturday and Sunday, and they were definitely long days, no doubt about that. We danced in what we call "pop ups" around the festival in the early afternoons, and then danced in a stage show during the later afternoons. All numbers went well, but as is always the case during the last weekend of July every single year, it was hot, and so we get very, very hot and sweaty. That does not make for the most pleasant of costume situations, to be sure. ;-) And dancing down on the road during the pop ups is uneven and makes turns a tad precarious. Our drum solo tried to knock us off in this fashion one-by-one, but we managed to thwart it. :0

The stage shows were beautiful. I was tired, no doubt about that, but I was very happy with how all of the pieces went, both solo and group. It was windy though, which always makes veil work a bit dicey. I practiced veil entrances for both of my solo pieces, and well... 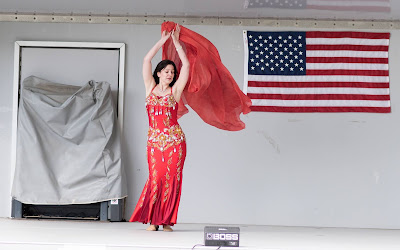 ...let's just say that didn't work out exactly as I had planned. 😂 On Saturday, I stubbornly still entered with a veil, determined not to let the wind foil my beautiful swishing sequence. I got on stage, the veil flew over my face, and I beat it back behind me so that I could release it, pretending like I planned for that to happen. :0 I left it at the back of the stage so that I wouldn't accidentally step on it and slip, and it FOLLOWED ME ALL THE WAY UP TO THE FRONT, then blew right into the center of the space, slowly balled itself up and rolled around like a tumbleweed, before finally blowing right off and into the audience.

Sunday, I gave up the ghost and entered without Veil. That went great, aside from the fact that sweat rolled into my right eye while I was dancing, causing my eyes to blink and water uncontrollably for the remainder of the piece.

All glamour, all the time, in the life of your belly dancing Catholic Librarian. 😎

And the group pieces were lovely as well. There were a lot of them, and thus a lot of quick costume changes, resulting in a bit of...:

...even as we were about to get on stage. :0 But hey, we're professionals. Which means we pull it off no matter what! And that we did.

It was a fun weekend, and I can't wait to do it again. Which we will. On Friday.

I haven't fully recovered from the last one yet, that's all. 😂 And guess who's coming along for the ride? Our good friend Sword.

I'll let you know how it all goes next week! How was your weekend, dear reader? Book Club post will be up tomorrow!
Posted by Tiffany at 1:01 PM