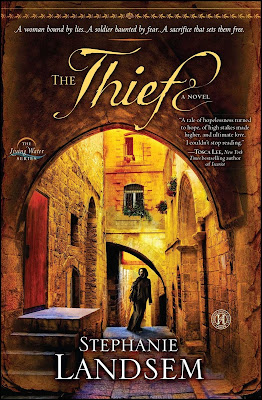 This is rough, guys. But how PERFECT is this read for Lent?! We're literally approaching Holy Week through this story! I need to catch my breath again, hold on... All right. Now I can start sweating again.

OK, we left off with that tragic priest situation that Nissa got caught up in. Nissa is feeling pretty bad about herself and her life choices right now, and feels that she cannot be forgiven. As she is walking home, she encounters the Evil Guy, the one who killed the priest - Gestas.

Just insert that emoji mentally after every sentence I'm about to write here. Gestas followed Mouse, and discovers his/her true identity. In a move that surprise absolutely nobody, he uses this to his advantage and threatens Nissa: she will steal with him and give him pretty much everything. Otherwise, he'll kill or maim Cedron. Nissa knows that she is trapped. She agrees only after Gestas does physical harm to her.

Longinus discovers her like this, and is distraught. He brings her home, and although he obviously doesn't know the evil Gestas situation, remember that he thinks that Nissa is employed as a prostitute to support herself and her brother. He offers her a solution: she can marry him. He would protect and provide for her.

This actually IS a solution to Nissa's secret problem. Gestas won't mess with her if she's married to a Roman centurion. Although she is tempted by this offer (she has come to genuinely like Longinus) in the end she refuses him, and does so in a deliberately hurtful manner so that he will not question her. She does not want him to be caught up into her dangerous situation. She plots to draw Gestas into a situation where he may fall into bad hands and get himself killed, and therefore out of her hair.

Meanwhile, Stephen is still playing chess in the prison with Marcellus. Longinus feels increasingly conflicted about what to do with him. He decides to use Stephen a bit for his own strategic advantage, but would also have the added benefit of releasing him without harm - he sends Stephen to warn Jesus not to come to Jerusalem. The Passover is coming, and he ways to set a trap for the thieves without the distraction of Jesus in town. As well, Longinus had overheard some conversations near the temple. Jesus has raised a man named Lazarus from the dead, and everybody is all abuzz. He overheard Caiaphas and the Sanhedrin plotting to have Jesus arrested for fear that the Romans will see the Jews generally as causing too much trouble, and possibly revolting. Longinus has a soft spot for Jesus, and does not want to see him killed.

In an amusing scene, Marcellus and Longinus help Stephen disguise himself and escape from Silvanus's arrival. Stephen warns them that Jesus will do as He is meant to do, despite any warning. Longinus makes plans to catch the thieves, by making the marketplace a bit more accessible to them at Passover (I can't remember all of the details here, but he had thought it out real well. ;-)).

On what we now call Palm Sunday, Jesus enters Jerusalem, much to Longinus's chagrin. This was *interesting* here, wasn't it, as to why the people lined the road with palms, and the background on the entryway to the city? In the fray, while the thieves are out and about, Dismas is captured. Nissa is HORRIFIED.

Dismas has been nothing but good and protective towards her, how can she leave him to be punished for all of their sins? In her emotional agony, she confesses to Cedron that she is a thief.

Good grief. I have a feeling that these next, and final, installments, of this book are going to be real tear fests. 😭

Thoughts please on this part of the book?! We only have 2 weeks left in our Lenten Book Club!
Posted by Tiffany at 9:00 AM