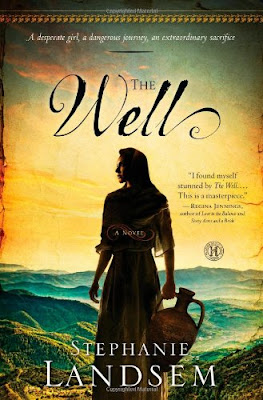 Welcome back, everyone! Our book is getting so good, isn't it?! This week we read chapters 17-20, and we are officially at some serious action. Go grab your coffee or tea!

All right, so we had left off at the trial. Chapter 17 lays out the trial details, and as is not unexpected, the entire thing is the doing of Zevulun, and he has recruited some additional bitter followers that he has worked up into a frenzy about the entire situation. Alexandros is there as a witness. 😡 Shem tries to help, but he is overpowered by the bloodthirsty crowd. Nava admits her guilt. She takes responsibility for her poor choices, and asks for her husband's forgiveness. I really admire the way that she is changing her life.

Her husband still loves her, but he is hurt, and allows himself to be dissuaded from his sympathetic feelings by the crowd. Nava is sentenced to death and immediately taken out to be stoned.

This scene was amazingly powerful. I have always tried not to think about how a person was actually stoned to death, and this reenactment made it abundantly clear how this will all go down. Shem and his grandfather are trying to help, but we as the readers feel as powerless as they do as they try to fight their way through the ravenous crowd. My heart was beating a mile a minute as I read along.

Nava is eventually knocked unconscious by a blow to the head as she tries to protect Asher, who has skirted in to her aid. I think the others believe Nava is dead, and Shem's grandparents take her back to their house in the hopes she could possibly recover. Meanwhile, Mara realizes what happened, and is initially upset that she wasn't made aware of her mother's trial. Everyone settles down a bit as they care for Nava. Mara comes to the realization that the only way her mother will wake up is to be healed. And the first person that comes to Mara's mind as a healer is Jesus. She sets off to find him.

Everyone tries to talk her out of it, as Jesus has moved on to Galilee by this point, and the journey would be dangerous for her. She refuses to give up, so Shem accompanies her. He knows that they will face many challenges as they make their way. Mara is in danger as a Samaritan female, and he himself could be recognized from his incident with the Roman soldier. They forge on.

I'm worried for them. I feel so upset about Nava. But I'm so happy for her that she has experienced this rebirth in her soul. Her husband came around at the end and tried to save her, and I'm hoping that this means there is hope for their relationship as well.

I was so moved by this section of chapters. I can't get over the unjust way women were treated in this society. And the general lack of charity or compassion, which unfortunately carries forward to this day in many ways. I love Mara and Asher so much, and I now feel so bonded to Nava and her struggle to do the right thing. We can all relate to this, yes? What did you think, dear ones?! Next week we read chapters 21-24!
Posted by Tiffany at 12:32 PM