Welcome back, all! Given that yesterday was a holiday here in the U.S., I figured everyone would be too busy to be reading this humble little blog. Thus, I'm going to bump everything back a day for this week. I have a dance post from the weekend, then we'll do book club tomorrow, and Tea Time on Friday. Sound good?

This weekend proved another interesting one, as we move into full-on festival season mode. I thought we were going to be rained out, but nope. Instead, it was just windy, super humid, and waited to rain until we were 75% of the way through our set. Then it rained too. :0

When I woke up Saturday morning, we had no running water. *groans* There was some kind of street-wide problem, and the town crew had arrived on the scene, shutting off the water for several hours. Naturally, that was right when I need to make myself presentable and wrestle my hair into submission. It was humid, as I mentioned, and humidity makes my hair revert to its wild and feral state. It's not that my hair is curly - because it technically isn't. Curly hair is really pretty! Mine is this half-hearted situation in which it's very wavy and poufy in all the wrong places, like right up on my scalp. The Dignified Poodle look is not exactly what I'm going for, especially for formal events. It's like God got distracted when he was beaming down his finger to form my hair. :0

So I get it straightened, slap on some makeup and my costume, and am not even out the door before my hair begins its insidious journey upward. There was nothing I could do about it at that point, so I persevered on to my destination. By the time we arrived at the waterfront boardwalk that would be our stage, it was even MORE humid than before. It wasn't scorching hot, for that we were grateful. But it was also windy. Very, very windy. Wind and veils do not mix very well, even when they are heavier chiffon rather than silk. We readied our veils apprehensively, and awaited our noon timeslot.

She had some of the music on her phone, but not all of it. Oh, and did I mention that it died right in the middle of our first piece? Because it did. :0

We were standing out there with fixed smiles mid-traveling pose while Claire sweated behind us, flicking the iPod until it worked long enough for us to finish that piece. Then we had to re-do the entire set list on the spot to accommodate what everyone could access via their phones. We did the veil pieces in close succession hoping the wind wouldn't get worse before we could finish, but it did. Suffocation by veil in the middle of a public boardwalk isn't anybody's idea of a good time, but we do what we have to.

A few other numbers got off, and in-between, I was becoming increasingly aware of what we'll call The Great Hair Situation of 2017. As I mentioned, I have very thick and textured hair, and in heat and humidity it simply refuses to do my bidding. First, the waves start to come out. Then it begins the insidious expansion process, inevitably resulting in frizz and halos of the kind you definitely do NOT want. And this is what happens just when Hair is out and about in humidity. When you factor in gale force winds, and the fact that your dance choreography also includes spins in which we flip our hair around, the situation takes a decided turn for the worse.

By the time we were approaching the end of our set, I was resembling SNL's Roseanne Rosannadanna: 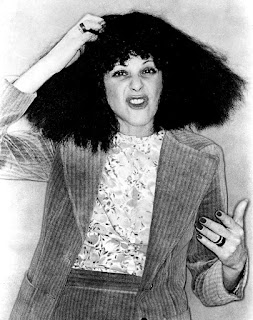 But, you know. We press on.:0 The last two pieces of music Claire could find on her phone included an old standby that we hadn't planned on performing. That sounds fine, but we hadn't rehearsed this piece in close to a YEAR. I have to admit, I was a bit nervous about that one. Apparently though, these old brain cells are still kickin', because as the music progressed, I remembered each and every movement that went in the choreography.

When we finished, I didn't even want to look at myself in a mirror. There was no way anything besides a titanium bristled comb was going to make it through the rat's nest I was then sporting as my hair, so I just carefully placed it over one shoulder and prayed for a swift journey home and into the shower. Hair and I had made it. Our next performance is also outdoors, and then I'll also have Sword to contend with.

How was your holiday weekend, dear reader?! Don't forget to pop back in tomorrow for book club!
Posted by Tiffany at 11:57 AM