A funeral, a weekend of travels with the kids, & a return to Ordinary Time 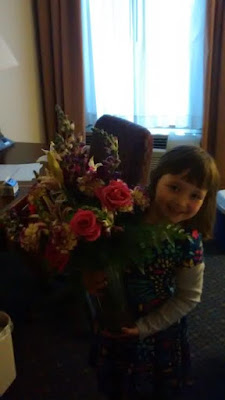 All! I really miss you when we don't chat for a few days, you know? And I have lots of plans brewing in this little head of mine. More on that coming later in the week. But for now, let's debrief our weekends, yes? Got your coffee?

It's Monday morning, and I'm starting it off with a headache.

I know, I know. It was a bit of a long weekend, and now I'm going into Monday morning being besieged by law students who are stumped by the sources they need to find for the law review. Law students are no slouches when it comes to research, so if they're telling me that "this is the worst list of sources to find that I've ever had!" well...I'm thinking it's going to be a somewhat challenging morning. And they're law students. So they're all intense and such. ;-)

All right, that's my current situation, which isn't altogether pleasant, but it could always be worse, right? So, the weekend. We had a funeral to travel to for a very lovely lady, Mike's grandmother, Eleanor. I just love her name, don't you? Mike and I had talked about that being our girl name when we had Anne. At any rate, Mike's grandmother was 95, she had led a long, full life, but when someone passes away, there's always that sense of loss. Sad.

So, on Friday, we packed up for a 3 hour jaunt to the funeral. The kids were *bouncing off the walls* excited about staying in a hotel. Mike and I, unsurprisingly, did not share that sentiment. ;-)

Only a three hour car ride, WITH entertainment provided, and yet:

Some things, my friends, are so incredibly predictable.

We arrive, and the kids exhaust themselves exploring the room and the rest of the hotel. We had a family dinner to attend, and then there was the first of two wake sessions at the funeral home. For Friday night, we decided to have Mike attend and leave me and the kids behind at the hotel, since it would go past Anne's bedtime, plus both kids would attend the second wake and funeral in the morning. Mike brings us back to the hotel and then departs. I was exhausted and hoping for a quiet evening of Downton Abbey mystery crochet-along crocheting, as I had brought Clue 1 along with me.

"Who wants to watch a movie?!"

My friends, when that suggestions gets met by a resounding declination, you know that you are in for a long, long evening. 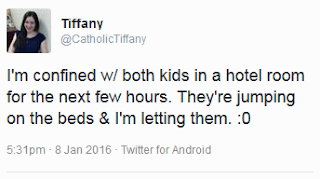 That about sums it up, right there. Our room was small, and yet they wanted to do nothing but run around and "find new things!" I know that this type of stuff is good for kids, but solidarity over the parental exhaustion quota, yes?

And that overnight? I'm steeling myself now, even just to recount it. :0 Mike and I are in one bed, and he is still coughing, dear, sweet, adorable soul that he is. Henry and Anne are in the other. Anne collapsed from sheer exhaustion around 9:30 pm. At around 10, the rest of us attempt to sleep. Henry climbs into bed with a pout face:

"She's taking up so much room!"

"Yes, I know Henry, I have slept with Anne before, so I'm aware of the problem. Just gently move her over, and it'll be fine."

I could have gone on and on about how I had Anne *in my body* for 9 months and thus are keenly aware of how uncomfortable she can make things, but I resisted.

I attempt to drift off. I can hear Mike trying to suppress his cough, poor darling. And then..

"HENRY. What are you doing?"

"I can't get comfortable! Anne keeps moving her legs!"

"Well, don't move around so much Honey, you're keeping us all up. Move her over! She won't wake up."

She sleeps like a rock, that Anne. I drift off...

"Henry. Why don't you try the sleeping bag on the floor?"

We had packed it just in case this very thing happened.

*lots more noise as Henry bumps around the room in the dark, fetching and rolling out the sleeping bag*

This went on for some time, Henry eventually transitioning back into the bed with Anne, lots of nostril flaring coming from myself. More coughing from precious Mike. MORE RUSTLING.

Eventually, I had drifted off and then been woken so many times I was convinced it must be close to morning and maybe I'd just get up and go down to the lobby for a cup of coffee and some crocheting. The time?

I think at least a dozen souls were released from purgatory right at that moment, kind and gentle readers.

It was a L.O.N.G night. And no rest for the weary, since we had the wake and funeral ahead of us in the morning. Along with that, tons of visiting with family that we don't get to see often, which while wonderful, is incredibly draining for introverted types like Mike and I.

The time at the funeral home was simple and very beautiful. There were lovely photographs set up of Mike's grandma throughout her life, and we spent a lot of time looking at each of them, Mike filling me in on what was going on in many of the photos.

After the funeral service, we attended a luncheon in her honor, with more family visiting. It was fantastic to catch up with everyone, but needless to say that by the end of the say, we were pretty tired again. I was bracing myself for the overnight, but things actually ended up working out much better. My in-laws were staying in the room next to us, and they let Henry sleep in the second bed in their room so that each kid had a bed to themselves.

Can I get an Amen?

Yesterday was consumed with lots of laundry and getting settled and ready for the Monday routine. Also, look at that, we're back to Ordinary Time on the liturgical calendar! Not for long though, as Lent begins February 10th this year.

But speaking of this very topic, today is my day over at Catholic Mom, and this month my piece discusses the feast of the Baptism of the Lord, and the end of the Christmas season. I would for you to check it out and leave me a comment over there!

All right, my friends, back to work for me. But good stuff to come this week, including a crafty post on the Downton Abbey mystery knit- and crochet-alongs! I know a few of you were going to be participating, so I'm counting on you to let me know how it's going for you! I'll have photos too of my progress, and would love to see yours!
Posted by Tiffany at 11:53 AM

Email ThisBlogThis!Share to TwitterShare to FacebookShare to Pinterest
Labels: Feast of the Baptism of the Lord, funerals, Henry, life, parenting, road trips, sleep